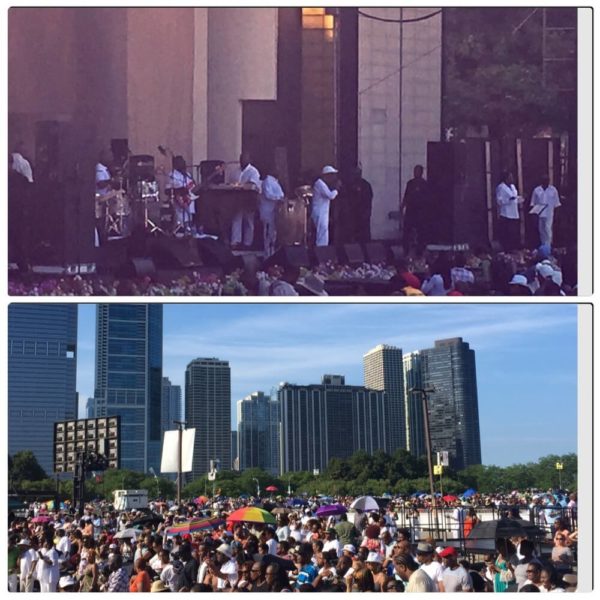 The stage is where so many artists are made and/or broken. The studio can’t mask your insecurities or imperfections once you make the decision to perform live. Maze featuring Frankie Beverly has been performing live for more than 40 years and the crazy part about it is, they haven’t released any new music since the early 90’s. It doesn’t matter because their fans still come out by the thousands adorned in all white just as the band does. Frankie can’t hold the notes like he used to but no one seems to care because you can still hear the smoothness through the raspiness of his voice and groove to the sound that only Maze can create. Besides that, he and Maze are some extremely cool gentleman.  They had swag before that was considered a thing and they continuously prove it by the thousands that still show up to support the group.
Sunday at the Taste of Chicago was no different. Thousands filled the Petrillo Music Shell  and the surrounding Grant Park area to hear Frankie and his bandmates do it one more time. Raspy voice and all, Maze fans don’t care because it is the legacy of what Frankie Beverly has done for soul music lovers that matters most to them. From “We are One” to “Can’t Get Over You” to “The Morning After,” the Chicago crowd was singing, swaying,  dancing in the name of love, and feeling “Happy Feelings” while embracing all of the “Joy and Pain” that made us on the perfect 80 degree day in the city of wind. In this moment it seems as if the city took a collective sigh of relief.  No one was worried about paying bills, no one was thinking about the violence, and there wasn’t a ounce of hate in the air.  You could just feel it as the love  in the air was thick as summertime Chi humidity.  It was uplifting from beginning to end and to see the power of music is awe-inspiring.  Even Minister Farrakhan was in the audience enjoying the Sunday soul session and of course Frankie took the time to acknowledge him as well as everyone else that has been supporting the band from day one and beyond.
Maze featuring Frankie Beverly is beyond measure and it shows in their performance. As Frankie approaches 65 he seems to be  having the same fun on stage he had when he as “Back In Stride Again.”  It was a show for the ages and definitely one Chicago enjoyed and needed. It was all love, laughter, and living in the moment from the time Maze hit the stage until the time they exited after performing “Before I Let Go” and “I Want to Thank You” as Frankie gave an honor to God.  While he honored the Most High, the fans followed suit and for a second Chicago seemed to laugh, love, dance, and even breathe in unison to honor the legacy of Maze featuring Frankie Beverly. Today is “The Morning After” and if those in attendance are anything like me, they are feeling the emotions from “after the night before. ”