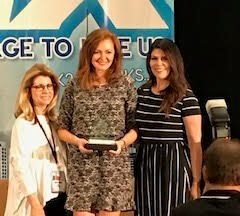 Digital and Radio Facts
Kellie Rasberry, longtime co-host of The Kidd Kraddick Morning Show, the most listened-to contemporary morning radio show in America, was honored with the 2019 MIW Airblazer Award today during the 31st Annual Talentmasters Morning Show Bootcamp (MSBC) at the Swissotel Chicago. Now in its 5th year, the MIW Airblazer Award stems from an alliance formed in 2015 between the MIW Group and MSBC, and honors a deserving on-air personality in radio annually.In addition to her work as co-host of The Kidd Kraddick Morning Show, Rasberry also co-hosts the weekly podcast, “A Sandwich and Some Lovin’” with her husband, Allen Evans. Kellie is also on the Board of Directors for the non-profit organization Kidd’s Kids, which takes children with life altering conditions and their families on all-expenses paid trips to Disney World.After more than two decades in radio, Kellie has won several Favorite Female Radio Personality of the Year awards. She was a co-host on FOX Television’s “Dish Nation”, co-hosted the syndicated radio show, “Love Letters with Matthew & Kellie”, co-hosted the webcast of the “Blockbuster Entertainment Awards”, co-hosted “Live! With Regis” during their Women of Radio Week, and played a role in the made-for-TV movie “Holiday In Your Heart” starring LeAnn Rimes. She has also commentated for the REELZ Channel docu-series, “The Price of Fame.”The Kidd Kraddick Morning Show is syndicated by YEA Networks, and heard on more than 65 Top 40 and Hot AC radio stations across the country, as well as the American Forces Radio Network, weekdays from 5am-10am CST.