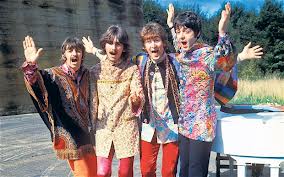 The Beatles’ Magical Mystery Tour — the controversial surreal film made by The Beatles and broadcast by the BBC in 1967 and unavailable for decades – comes to THIRTEEN’s Great Performances, Friday, December 14 at 10 p.m. on PBS. (Check local listings.) The film will follow the new documentary Magical Mystery Tour Revisited airing at 9 p.m. (Check local listings.)By the end of that year, The Beatles had achieved a creativity unprecedented in popular music. Their triumphant summer release Sgt. Pepper’s Lonely Hearts Club Band was both avant-garde and an instant hit. It went straight to No.1 in June and remained there for the rest of the year. They immersed themselves in the fiercely radical art of the new counter culture and decided to make a film on their own terms, not as pop stars but as artists. However, was their adoring public ready for the move?The film featured six new songs: “Magical Mystery Tour,” “The Fool on the Hill,” “Flying,” “I Am the Walrus,” “Blue Jay Way” and “Your Mother Should Know.” They’ve all become classics but the loose unscripted narrative, very much in the experimental mood of the art of the time, proved too much for the majority of viewers.Magical Mystery Tour is a surreal take on the British working class tradition of a coach trip to the seaside, featuring an eccentric cast of characters, some played by professional actors. Other passengers included friends, associates and people they’d just invited along for the ride. In September, they set off from London and headed west to Cornwall where most of the film was shot.The film was broadcast in black and white at 8:35 p.m. on BBC One on Britain’s Boxing Day 1967 to a family audience expecting a frothy entertainment in the style of A Hard Day’s Night and Help! It followed a Petula Clark special and preceded a Norman Wisdom feature film.While the music itself had been rapturously received in the form of a double EP high in the charts, the response to the film from the establishment TV critics and the majority of the 15 million adult viewers was negative to the point of vitriolic in some cases. As a result, the film was never nationally broadcast in the US and had only limited distribution elsewhere.Some of the musical extracts have become familiar, and though the film did appear briefly on VHS in the late 80s, it has only otherwise been available on bootleg DVD. Forty-five years on, how many of its viewers are still around? And how many of them remember? The chances are that very few under the age of 50 have ever seen it. “Magical Mystery Tour – is that the cartoon film?” is the most common response to the title. Its life has been lived as an album, albeit a monumental one, not even as the double EP of the original release.Now, all this time later, the true setting of those fabulous songs is available again. The film has been fully restored to the highest technical standard with a remixed soundtrack. Properly presented for the first time, Magical Mystery Tour comes out of the shadows and onto the screen.For 50 years, THIRTEEN has been making the most of the rich resources and passionate people of New York and the world, reaching millions of people with on-air and online programming that celebrates arts and culture, offers insightful commentary on the news of the day, explores the worlds of science and nature, and invites students of all ages to have fun while learning.For Great Performances, Bill O’Donnell is series producer, and David Horn is executive producer.Major funding for the Great Performances telecast is provided by the Irene Diamond Fund, The Starr Foundation, Vivian Milstein, The Agnes Varis Trust, the Philip and Janice Levin Foundation, and public television viewers. Visit Great Performances Online at www.pbs.org/gperf for additional information about this and other programs.Photos and other material can be accessed at the THIRTEEN Online Pressroom.Visit Great Performances Online at www.pbs.org/gperf for additional information about this and other programs.###”Magical Mystery Tour” Cast & credits:John LennonPaul McCartneyGeorge HarrisonRingo StarrIvor Cutler (Mr Bloodvessel)Jessie Robins (Ringo’s aunt)Victor Spinetti (army sergeant)Derek Royle (Jolly Jimmy)Nat Jackley (Rubber Man)Mandy Weet (hostess)George Claydon (photographer)Nicola (little girl)Shirley Evans (accordionist)Maggie Wright (starlet)Jan Carson (stripper)The Bonzo Dog Doo-Dah Band(band in strip club)Production: Denis O’DellAssisted by: Gavrik Losey1st Assistant [Director]: Andrew BirkinDirector of Photography: Richard StarkeyCameramen: Aubrey Dewar,Tony Busbridge, Daniel Lacamore, Michael SeresinEditor: Roy BensonDesign: Roger Graham, Keith LiddiardSound: Michael LaxSound Editor: Gordon Daniel2012 RestorationRestoration Supervisor and Colour Consultant: Paul Rutan JrDigital Restoration, Digital Colourist,Digital Artist and Digital Continuity:Randy WalkerProject Coordinator: Allan RousePhotochemical Preservation of 16mm Original Materials: Eque Inc., Los AngelesDigital Restoration:Kiran Jagtap and Team Eque,Hyderabad IndiaSound Producer: Giles MartinSoundtrack and Songs Mixed atAbbey Road Studios by: Sam Okell

Radio FactsApril 15, 2020September 17, 2022
April 15, 2020September 17, 2022
FacebookTwitterInstagramYoutube
We use cookies on our website to give you the most relevant experience by remembering your preferences and repeat visits. By clicking “Accept”, you consent to the use of ALL the cookies.
Do not sell my personal information.
Cookie SettingsAccept
Manage consent