To celebrate British-Bahraini trumpeter Yazz Ahmed’s double win at last night’s (Tuesday 27 October) high-profile The Jazz FM Awards with OANDA for PRS for Music UK Jazz Act of the Year and Album of the Year, PRS for Music has revealed a chart of the soloist and composer’s Most Broadcast Songs in the UK. 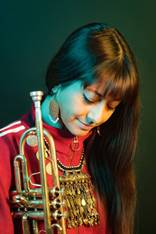 Livestreamed from Ronnie Scott’s Jazz Club, other nominees in these prestigious categories voted for by the public included Ezra Collective co-founder and talented keys player, Joe-Armon Jones, and Mercury Award nominated ten-piece band SEED Ensemble. The awards allowed jazz fans up and down the country to have their say and decide who to crown as winner at the ceremony.

Yazz Ahmed’s Most Broadcast Songs is based on UK radio data provided by PRS for Music, the organisation which represents the rights of over 150,000 songwriters, composers and music publishers. Yazz Ahmed, who seeks to blur the lines between jazz and electronic sound design, brings together influences from her mixed heritage to create spellbinding, evocative music.

Topping the chart is Ruby Bridges. The song is a piece dedicated to the American civil rights activist, who was the first and only African-American child to enter the William Frantz Elementary School in New Orleans in 1960. Ruby Bridges is one track from the six-piece album, Polyhymnia, which won Album of the Year at the Jazz FM Awards.

Polyhymnia was inspired by courageous and influential women and evolved from a commission in 2015 by Tomorrow’s Warriors, with support from PRS Foundation’s Women Make Music Fund. Alongside Ruby Bridges, the suite includes pieces dedicated to Rosa Parks, Malala Yousafzai, Haifaa al-Mansour and Barbara Thompson.

The chart also features The River, co-written by Yazz Ahmed with Pete Cunningham and performed by Bristol-based jazz and electronic collective, Ishmael Ensemble, as well as both the original and remixed versions of Al Emadi, from The Wire’s 2017 Jazz Album of The Year, La Saboteuse.