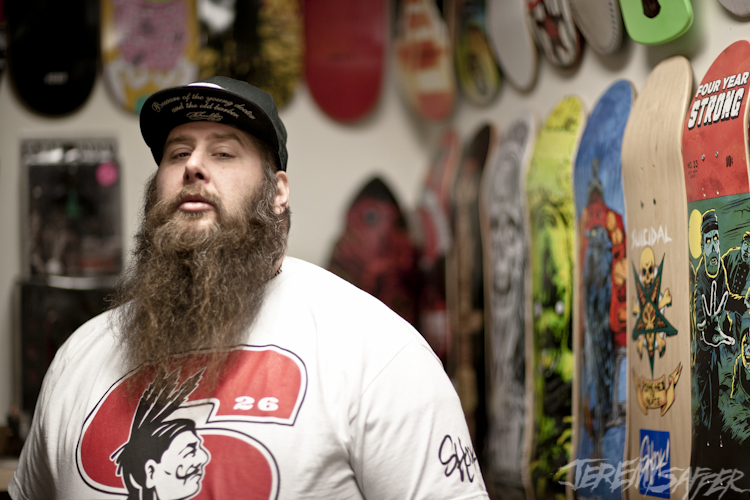 Worcester, Mass. – At 40 years old, Scott Lee is clearly not satisfied to settle into everyday hum-drum life. Instead, the Massachusetts native is building an empire of music-business upstarts that includes everything from launching bands’ careers to creating exciting opportunities for fans to meet those bands.

After more than two decades in the music business, Lee, co-founder of the New England Metal and Hardcore Festival, is keeping his entrepreneurial spirit alive with the launch of Sound Rink, a company dedicated to connecting fans with the bands they love.

Sound Rink was created by Lee with partners Jason Mageau and Cody Delong as a means for fans to go beyond the music and get up-close and personal with the artists they love by offering special packages that offer meet & greets, photo opportunities, autograph signing, and question & answer sessions. Packages are sold directly through Sound Rink’s website at www.soundrink.com.”Over the years, I have seen how much it means to fans to be able to meet their favorite bands,” Lee said. “Rather than making fans stand outside of a backstage door for hours hoping for a chance meeting, we decided to come up with a way for fans to not only meet them, but to actually have time to chat and take pictures.”Since its launch a few short months ago, Sound Rink has already exceeded expectations. “We knew something like this would get a warm reception, but we had no idea it would be this hot,” Lee said. “We have plans to expand and add other elements to provide the music fan with an experience they will remember forever.”Sound Rink is just one element of Lee’s musical empire. Lee, who has been working for the independent concert promoter MassConcerts since 1992, is most known as being the man behind the madness at the New England Metal and Hardcore Festival, which is now in its 14th year.Lee was inspired to create the New England Metal and Hardcore Festival after attending a similar type of event and seeing how it was run. Lee knew he could do it better and set the gears in motion. He got John Peters, his boss at MassConcerts, to partner up with him and together they began to build what would become the premier festival of its kind in America. The festival has become a launching pad for many bands’ careers, and bands clamor to play the fest every year, sometimes rearranging touring schedules to make it possible.”Fans travel from all over the world for this fest in a town they can’t even pronounce correctly,” said Lee. “They are very loyal. After 13 years of doing this, we now see fathers coming with their sons…and both raging hard during the fest.”This year’s festival will take place April 20-22 at the Palladium in Worcester, Mass., its home since its inception. A complete listing of bands and information is available at the festival’s website (www.metalandhardcorefestival.com).Additionally, Lee has run Crimson Management (www.crimsonmgt.com) with partner Leah Urbano since 2000. The company manages a roster of about a dozen bands, including The Acacia Strain, Mychildren Mybride, and Vanna. He is also part-owner of the Anthem Agency, a booking agency dedicated to the metal and hardcore scene, with Urbano.”Leah and I started out managing the Acacia Strain 10 years ago,” said Lee. “We were seeing so many great unsigned bands and we knew we could help them go farther. The business has grown so much over the years and we now represent a great bunch of bands. It’s exciting to take an unknown band and build them into stars.”Lee has also ventured into clothing, creating Shook Clothing with partner Nick Holman in 2009. Shook Clothing strives to be the brand that connects the hardcore and metal scenes with the streetwear culture. The brand is influenced by those music scenes, as well as the skateboarding, hip-hop, and tattoo cultures. Shook is sold at select retail outlets, concerts, and online (www.shookclothing.com).The common thread through all of Lee’s companies is honesty, a strong work ethic, and attention to the finest detail. These attributes and Lee’s good reputation give all of his endeavors an edge right from the start.