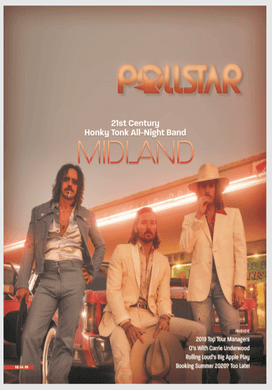 Pollstar, the leading trade media platform for the global live entertainment industry, is co-sponsoring the one night only re-opening the iconic Palomino Club for a performance by double GRAMMY® nominees Midland. With Midland at the Palomino, the legendary North Hollywood Country music club and watering hole, which would have commemorated 70 years of honky-tonk heritage this year, will have one last throw-down. Additional sponsors for the evening include Stagecoach Music Festival, Dos Equis, the Academy of Country Music, Igloo Coolers and Tito’s Handmade Vodka.Midland, current nominees for CMA New Artist of the Year and Vocal Group of the Year, grace the cover of Pollstar’s Oct. 14 issue with a career-defining feature written by the award-winning Nashville-based journalist and author Holly Gleason. The issue also features photography of Midland’s Jess Carson, Cam Duddy and Mark Wystrachu by acclaimed photographer Harper Smith, who is known for her high fashion work with various international editions of Harper’s Bazaar, W, Interview, Vogue, Paper, Nylon and Playboy.To celebrate their one-night stand at the Palomino, the band will make their debut on Ellen Tuesday, Oct. 15th with a performance and surprise announcement.”We are always looking to put groundbreakers on our cover,” says Pollstar Executive Editor Andy Gensler, “whether a touring icon like Billy Joel, up-and-comers like Tyler Childers or Ari Lennox, metal lords like Metallica or Slayer, or a thrilling, outside-the-box country act like Midland who are breaking through the same way Waylon and Willie once did. These are the stories we’re trying to tell. We are looking for innovators, but also musicians who really bring it, so for us, Midland was a natural.”Additionally, this special issue of includes Pollstar’s inaugural 2019 Top Tour Managers honorees representing a cross-section of some of the year’s biggest and best tours. The feature contains anecdotes and tales from the road including Brian Marquis literally carrying Billie Eilish on his back through Lollapalooza after she’d sprained her ankle; Todd Bunch dealing with an artist who stole an ambulance; and Tina Farris, who said her master’s degree in clinical psychology is an invaluable tool in her line of work. Also in this issue is an interview with promoters Matt Zingler and Tariq Cherif on the eve of their Rolling Loud festival making its NYC debut; an in-depth Q&A with Carrie Underwood discussing the changing role of women in country and her CMA Entertainer of the Year nomination; and a look at the “24/7/365 Booking Siege” that is becoming the norm in the touring business. Pick up this issue of Pollstar here and click here to subscribe to Pollstar.