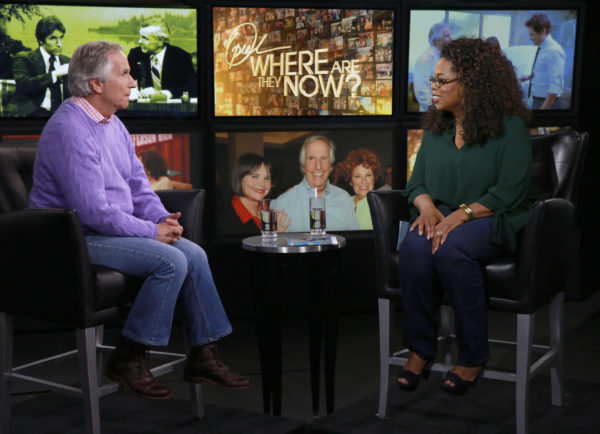 All-new episodes of the popular series “Oprah: Where Are They Now?” featuring revealing interviews and updates with the biggest celebrities and headline-makers of our time will air on Saturday nights beginning with two back-to-back episodes April 25 at 9:00 p.m. and 10:00 p.m. ET/PT on OWN.”Oprah: Where Are They Now?” continues with Oprah’s one-on-one interview with one of the most beloved entertainers of our time, Henry Winkler, and more star-studded updates with: Emmy-winning television host Ricki Lake; comedian D.L. Hughley; World Series baseball champion Darryl Strawberry; celebrated actresses Garcelle Beauvais (“The Jaime Foxx Show”), Leah Remini (“The King of Queens”), Angie Harmon (“Rizzoli & Isles”), Charlene Tilton (“Dallas”) and American Theatre Hall of Famer Estelle Parsons (“Roseanne”); the first unsigned artist to have a #1 single, Lisa Loeb; original supermodel Janice Dickinson; “Baywatch” beauty Nicole Eggert; “The Real Housewives of Beverly Hills” star Taylor Armstrong and many more.Plus, Oprah talks to Rusty Yates, whose ex-wife Andrea drowned their five children in the bathtub in 2001, about his stunning revelation regarding their relationship, forgiveness and how he is moving forward from the ultimate personal tragedy with a new wife and son. Then, Oprah sits down with Ted Kaczynski’s brother David who in 1995 notified the authorities that he suspected his older sibling was the “Unabomber.” He discusses what he believes may have happened to lead him to this end and what their relationship is like today.