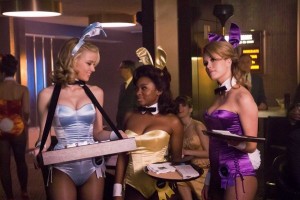 Each episode of the 1960s-era drama about   Hugh Hefner’s iconic Playboy Club in Chicago will feature multiple performances, by both the show’s cast — mainly the club’s ‘bunny’ hostesses — and guest stars paying tribute to ‘60s music legends who once performed at the club.

In the vein of Fox’s hit musical “Glee,” the series will release the music on a weekly basis for purchase via iTunes. The show’s production company, 20th Century Fox Television, teamed with Verve Music Group, a division of Universal Music Group, to release the tunes, the label announced on Monday.

Colbie Caillat, “The Voice” winner Javier Colon, and Raphael Saadiq are all set to appear on the series performing the music of Lesley Gore, Ray Charles and Sam Cooke, respectively. Tributes to Roy Orbison, Frank Sinatra, James Brown and others  are expected throughout the season.

The Los Angeles-based production collective the Transcenders is producing the tracks for the show, and cast vocals are being helmed by singer Richard Marx in Chicago, where the series is filmed.