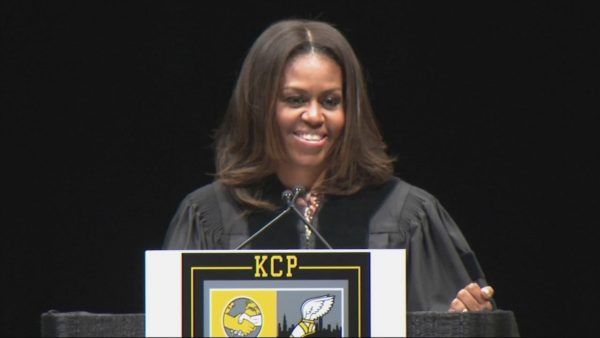 One thing I absolutely love in life is to hear Michelle Obama speak. She is the true personification of inspiration. She is a south side of Chicago representative through and through. Yes, I’m from the south side too so I’m probably possess natural bias toward this but whatever.
After winning the First Lady’s FAFSA video challenge, the students of King College Prep were treated to a dynamic commencement address from the south side native. A CPS graduate from Whitney Young Magnet High School, Mrs. Obama returned to her roots to offer the Class of 2015 something they will probably remember for the rest of their lives.
“With your roots in this community and your education from this school, you have everything…everything you need to succeed in life,” said Mrs. Obama. “With every choice you make, and with the way you carry yourself each day, you can write a new story about our communities.”
Her visit to King was part of the First Lady’s “Reach Higher” initiative – an effort to inspire every student in America to take charge of their future by completing their education past high school, college, and beyond. King College Prep was the winner of the First Lady’s FAFSA Completion Challenge, having submitted a mock episode of the TV drama “Scandal” to demonstrate their creative approach to this important process. Mrs. Obama was wowed by the video so she took it upon herself to send over to the cast of Scandal.  I guess when you are the First Lady of the United States, you got it like that.  When Shonda Rhimes and her staff heard about it, the cast of “Scandal” sent the King graduates a congratulatory message that was shown at graduation.
Not only did the King graduates receive a special message from the cast of Scandal, but they also received something better. They were the proud recipients of encouragement and inspiration from a woman that grew up where they grew up and looked just like them. Check out the First Lady’s speech below.