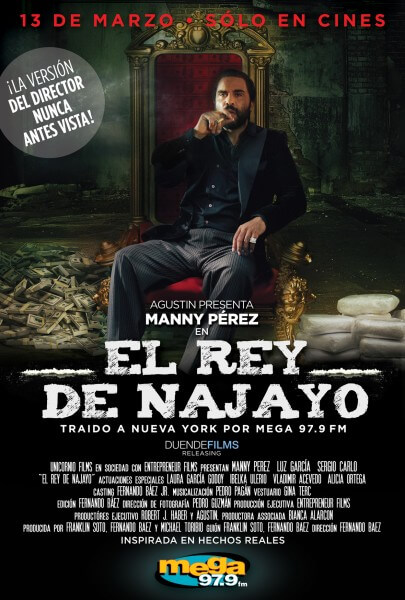 MEGA 97.9FM, ELF FILMS PRESENTS AND AUGUSTINE SE PROUD TO PRESENT THE NEW YORK PREMIERE OF “THE KING OF Najayo” A HISTORICAL PREMIERE THIS THURSDAY MARCH 19 7:00 PMEl Rey avoid-2nd draftACTION MOVIE MORE SUCCESS AND AWARDED WITH THE “SOVEREIGN AWARD” IN THE DOMINICAN REPUBLIC OPENS FOR THE FIRST TIME IN THE BIG APPLEWHAT: Spanish Broadcasting System, Inc. (SBS) (Nasdaq: SBSA) Megafilms its film division and its official broadcaster in the Big Apple, Mega 97.9FM, together with Duende Films are pleased to announce the premiere in New York one of the highest grossing films of the Dominican Republic. “The King of Najayo” with a gala premiere to be held on Thursday, March 19th in the Big Apple, the Regal Cinemas E-Walkstadium 13 & RPX.The film features the masterful performance of Manny Perez (Homeland, Bella, Washington Heights) who won the Sovereign Award for his portrayal of the main character, the highest honor that can be awarded to a player in the Dominican Republic. “The King of Najayo” is a film by Fernando Báez, and also includes the participation of notable figures of the theater and the Dominican such as Luz García, Rafael Estefan, Laura García Godoy, Vladimir Acevedo, Sergio Carlo Ibelka Ulerio and television.THE FILM:Based on true events, “The King of Najayo” presents the dramatic story of Julian (Manny Perez) a Dominican drug kingpin who despite being in prison, could keep the Dominican society in a state of suspense by more than 13 years. At the age of 12 years, Julian witnessed the death of his father in the hands of the local military authority, for a well-intentioned attempt to deliver a package of drugs that had accidentally found while fishing. As a result of this experience, Julian develops a thirst for revenge that makes assassinate everyone involved in the death of his father. In the process becomes a major drug lords in the country and a powerful leader within the Dominican society. However, despite its overwhelming power and easy access to everything he could want in life, Julian meets a woman he does confront himself: Laura (Luz Garcia), who despite having lived more dramatic than those of Julian, now has decided to choose the path of love, rather than revenge.