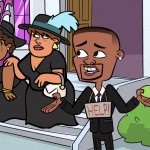 Kevin hart is not wasting any time. He worked extremely hard to get to his current A-List status and he is definitely trying his hardest to stay there. He has conquered the stage as a stand-up as his talents and work ethic have taken him from small comedy clubs around the country to a world tour and selling out Madison Square Garden twice. Although the majority of his roles are those of a comfortable comedic nature, he has also tackled the big screen with breakout roles like his character in “Think Like a Man.” Not to mention, he has two major stand-up releases on the big screen as well under his own production company, HartBeat Productions – pssst, that means he keeps the majority of the profits. If that wasn’t enough,  his “Real Husbands of Hollywood” is currently in it’s second season on the BET Network and is still gaining notoriety. Now he is trying to conquer the internet with a new animated web-series.  Kevin has  immortalized his eccentric family members in his numerous stand-up comedy routines. The Hart family now takes center stage as they, along with a young kevin hart, tell the misadventures of kevin hart and his friend. Check out the first episode of Kevin Hart’s “Say It With Your Chest.”https://youtu.be/n_k9_XF–aM

Hassahn - January 25, 2021 0
The Empire State Building (ESB), in partnership with iHeartMedia New York, launched a national contest that will gift one couple the socially distanced wedding of their dreams on Valentine’s Day weekend at the world’s most romantic building, with everything from the dress to the wedding rings included. [...]