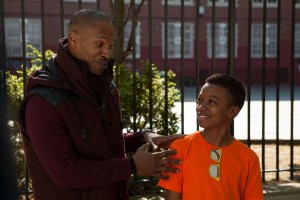 Jamie Foxx stepped behind the camera in Brooklyn, New York last week as Director for Canon’s “Project Imaginat10n.” Starring Tyrin Turner, a long-time friend and star of cult classic, Menace II Society and Nichole Galicia, from Django Unchained, Jamie was a hands-on director. And he had some great visitors on set ““ Ron Howard, his mentor on the project, David West from the Pacers and tons of fans including the Sanitation Department that was across the street on the last day of filming.The other celebrity directors for Project Imaginat10n include Eva Longoria, James Murphy, Biz Stone and Georgina Chapman and consumers can now take part in the same creative experience. Filmmakers of all skill levels can select from the same pool of 91 winning photos to showcase their creativity and storytelling abilities by taking a seat in the director’s chair. Submissions will begin on June 4, 2013 at imagination.usa.canon.com