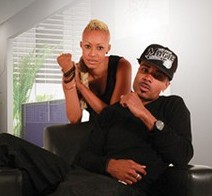 Some call it luck, some would call it perfect timing but this duo collaboration will soon have fans and those not familiar with these artists standing on their feet and singing out loud. New Christian Hip-Hop Crooner J. Long, formerly of platinum selling Hip-Hop/R&group Pretty Ricky and GRAMMY ®, Soul Train, BET Award Nominated and Stellar/Dove Award winning Gospel singing sensation ANGEL of Billboard chart topping veteran female group Trin-I-Tee 5:7 will be demanding attention from all avenues as they release “Woman of God” Remix single.”Woman of God” remix, which is available at iTunes isn’t your traditional Gospel feel. Expanding his audience J. Long aims to reach not just a conservative demographic but by those who enjoy a relaxed but enticing tempo. With his lyrics he describes a woman of substance and class, but more importantly a woman who believes in the heavenly father. Adding the sweet but soulful voice of ANGEL onto this track J. Long makes this a track that men and women will be able to enjoy.A message well approached on this track J. Long asks God to send him a woman molded as a God fearing woman, and someone who he knows will make a great wife, mother and complete his life. Then you have a woman asking God for a man who walks in the ordered steps of the heavenly father and will add to her dynasty as a wife and mother and remain as a child of God is a message well conveyed over this four minute track.Listen to “Woman of God” Remix SingleSince J. Long’s transition from R&B/Hip-Hop to Christian music, he has received a staggering reception from fans and consumers and has garnered major media attention across the country. J. Long is now a Born again Christian and no longer performs secular music.Major online news portal Yahoo! Music (click to view) exclusively interviewed J. Long and premiered his first Christian hip-hop music music video and buzz single “Shake The Devil Off”. Additional notable press features and interviews include, DaGospeltruth.com(click to view), Full Blast Magazine, The Timothy Hodge Radio Show, among many more.In September J. Long released his first Christian Hip-Hop Mix-tape entitled R&(REDEEMED & BLESSED), which is currently available at www.jfammusic.com. This mix-tape serves as a contribution to his overall project release in 2013. J. Long hopes to build a staggering response and boost the anticipation of his album entitled R&(REDEEMED & BLESSED), which he continues to collaborate and prepare for its release in 2013. J. Long plans to give Christian hip-hop a new feel and works to make his message a more effective one.A “Woman of God” Remix music video will be released in January 2013. ****