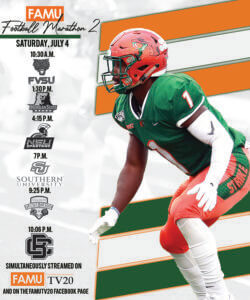 Rattlers Can Enjoy Highlights from the 9-2 2019 Season

Games will be broadcast from 10:30 a.m. Saturday, July 4, on FAMU-TV20 and streamed simultaneously to a global audience on the FAMU-TV20 Facebook page.

“This is a great opportunity for us to highlight our student-athletes and the success of our program under Head Coach Willie Simmons,” said Vice President and Athletic Director Kortne Gosha. “During these uncertain times, it is important that we keep our fans and donors engaged. We hope that everyone around the country can enjoy the special moments from last year as a reminder that we still need their support now as we face the global pandemic.”

The Rattlers went 9-2 overall and 7-1 in the Mid-Eastern Athletic Conference. The 2019 team finished with the best record among Division 1 historically Black Colleges and Universities and was named the Black College Sports Network Black College National Champions.

Throughout Saturday’s marathon, fans will be encouraged to assist the athletic program by giving to the Rattler Athletic Fund  https://my.famu.edu/giving/marathon-2