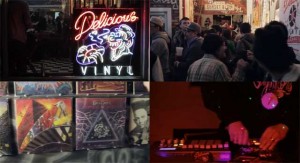 Started in 1987 by DJs Matt Dike and Michael Ross, Los Angeles-based independent label Delicious Vinyl gave rap two of its earliest reputable crossover successes in Tone Loc and Young MC, who broke platinum with “Wild Thing” and “Bust A Move” respectively. Between releases with Masta Ace, The Whoridas, Brand New Heavies, Mellow Man Ace and more, they released Bizarre Ride II The Pharcyde, the classic debut from West Coast rap group The Pharcyde. DV recently dropped a slew of unreleased material from immortal producer J Dilla, namely Lost Scrolls Vol. 1, Frank-N-Dank 48 Hours, and new Dilla-produced music from The Yancey Boys. Now, Delicious Vinyl continues its devotion to hip-hop’s past, present and future. Located directly underneath the record label’s HQ in Hollywood, California, the Delicious Vinyl store officially opened up its doors for business in February 2013, and is the first DV store of its kind. Selling Delicious Vinyl music and merchandise, it’s the perfect place to pick up classic DV records, including rare and out-of-print joints, as well as fashionable threads stamped with the DV logo, a true hip hop music staple. The store also serves as an intimate gallery and event space, regularly showcasing works by artists such as SLICK and Cook One, and hosting live shows and parties with a wide variety of guests. Akin to Miss Lily’s in NYC’s Greenwich Village, the West Indian themed hotspot, the Delicious Vinyl store offers a hip-hop themed space for the musically-inclined to shop, hang out, and generally take part in and enjoy the culture. Essentially, the DV spot is a place to discover, draw inspiration, and embrace the Delicious Vinyl aesthetic.https://youtu.be/l25GetSqifI