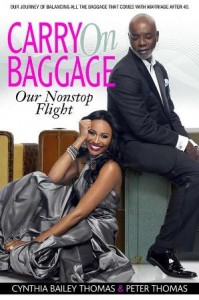 The women from The Real Housewives of Atlanta have been very busy, and Cynthia Bailey and her husband Peter Thomas will be releasing a memoir together, titled, ‘Carry-on Baggage – Our Nonstop Flight.’ The book will hit shelves in July and the couple is revealing how they make their marriage work and are sharing knowledge on their business ventures with readers.”Cynthia Bailey-Thomas and Peter Thomas are part of the ensemble cast of the Bravo Network‘s hit reality show, The Real Housewives of Atlanta. Cynthia has worked as a fashion, beauty and runway model for over 25 years. She is the founder and CEO of the Atlanta-based fashion andmodeling school; The Bailey Agency. Peter has been a fearless entrepreneur for most of his life. He is the CEO of Peter Thomas Entertainment Group, Peter’s Brew Coffee and an expanding Bar One franchise. Together, they make the daunting, time-consuming, nail-biting jobs as television personalituies, business owners, parents and dedicated spouses look almost manageable.In their straight talk couple‘s memoir, Carry-on Baggage – Our Nonstop Flight, Cynthia and Peter chronicle their journey of raising a blended family, running a mini empire and keeping the fire burning in marriage after 40.Carry-on Baggage will inspire, provoke and make readers laugh out loud as they take Peter and Cynthia’s nonstop flight to finding marital bliss.”