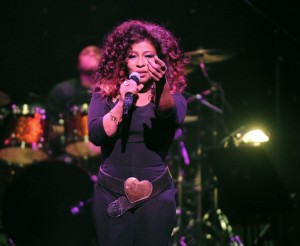 Chaka Khan Enterprises announced today that Khan has had to cancel four concert dates in June due to extended vocal rest ordered by her doctor. The concert dates include, The Capital Jazz Festival at the Merriweather Post Pavilion in Columbia, MD (Saturday, June 8); the Pittsburgh International Jazz Festival, held outdoors in the downtown Cultural District in Pittsburg, PA (June 9); an appearance with the Columbus Symphony Orchestra at Columbus Commons in Columbus, OH (June 14) and Joni: A Portrait in Song at Massey Hall in Toronto, Canada (June 18 and 19).However, Khan will attend the Apollo Spring Gala in her honor on Monday, June 10, at the Apollo Theater in Harlem, New York. The Apollo will induct Chaka Khan into the Apollo Legends Hall of Fame at its 8th Annual Spring Gala Benefit. GRAMMY ® award-winning artist Erykah Badu will present Khan, one of American music’s most vital icons, with the Apollo’s highest honor. In addition, the program will include special tribute performances by Patti LaBelle, Mary J. Blige and Deborah Cox. Time Warner, Inc. will accept the Apollo’s 2013 Corporate Award, presented by actress Sarah Jessica Parker . Carol’s Daughter Founder & President Lisa Price will receive the Percy E. Sutton Civic Leadership Award. Celebrated Emmy award-winning entertainer, Wayne Brady , will host the evening.Khan’s forthcoming album, The iKhan Project: Aliv e, originally scheduled for release on July 2, has been rescheduled for release in the Fall 2013. “Due to her doctor’s orders, it’s best that we move the date to give her the proper and adequate time to promote and market the new album,” says Khan’s manager, Tammy McCrary of Chaka Khan Management and Enterprises. “We are looking forward to a great project and a very robust concert and tour schedule this fall.”This year, 2013, marks the 40th anniversary of Chaka’s career in music and entertainment. The celebration will include the release of a series of new albums, titled The iKhan Project. The iKhan Project series will include recorded music in eight genres, including R&B, jazz, pop, rock, gospel, country, classical and dance music.