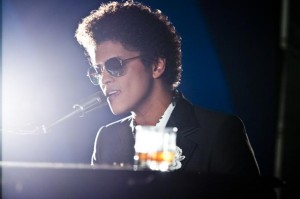 This week, singer/songwriter/producer Bruno Mars @BrunoMars tweeted the music video for his new single from “Unorthodox Jukebox”, a ballad called “When I Was Your Man”.The Grammy winning superstar’s follow up to his 2010 debut solo release “Doo-Wops & Hooligans” was released last December.Mars, whose birth name is Peter Gene HernÃ¡ndez, is a 27 year old native of Hawaii. He is of Puerto Rican and Filipino descent. Before achieving success as a soloist, Mars was an acknowledged producer for many high profile artists. Mars saw this period of his career as a discovery process, and an opportunity to hone his writing skills.Mars is the recipient of an American Music Award, eight ASCAP Awards, a Billboard Music Award, a Brit Award, one Grammy, one Soul Train Award, and more. He’s been nominated for a Grammy a total of 12 times, and is in the Best Rap Song category for this year’s ceremony. Mars is also one of the featured performers in this week’s telecast.”When I Was Your Man” is a haunting melody with a characteristically romantic hook. Mars sings of flowers and dancing, just in time for Valentine’s Day.

When I Was Your Man