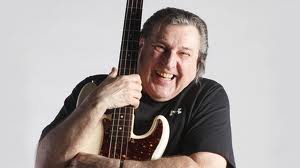 Bob Babbitt, a bass player who became world-renowned for his studio work at Motown Records and, as an independent musician, with a host of celebrated stars, passed away this morning, July 16, in Nashville, TN of complications from brain cancer at the age 74 according to his manager, David Spero. Babbitt was a Nashville resident for the last 26 years. Babbitt is survived by his wife, Ann Kreinar, and their three children, Carolyn, Joseph and Karen. A memorial is being planned for late August in Nashville. In lieu of flowers, donations can be made to The Musicians Hall of Fame in Nashville TN.Born Robert Kreinar 11/26/37 in Pittsburg, PA, Babbitt started his career freelancing around Detroit in the mid-1960s, playing on several national soul and pop hits; he joined Stevie Wonder’s touring band in 1966. A year later he was invited to join Motown’s house band, a.k.a. the Funk Brothers, to help meet demand at the company’s constantly busy recording studios. Babbitt was the only one tough enough to work in the shadow of Motown’s already-legendary bassist James Jamerson and assert his own identity onto some of Motown’s biggest hits.At Motown, Babbitt had a prolific six-year run, particularly with producer Norman Whitfield, for whom he played on such hits as the Temptations’ “Ball Of Confusion (That’s The World Is Today),” the Undisputed Truth’s “Smiling Faces Sometimes” and Edwin Starr’s “War”; with other producers he is the bassist on Smokey Robinson & the Miracles’ “The Tears Of A Clown,” Stevie Wonder’s “We Can Work It Out,” and, at a session he recalled proudly throughout his life, one half of Marvin Gaye’s epic 1971 album What’s Going On, in which Babbit anchored the rhythm section from “Mercy Mercy Me (The Ecology)” through “Inner City Blues (Make Me Wanna Holler).” (Jamerson played the other half.)After leaving Motown, Babbitt’s career continued to flourish, recording with such greats as Bette Midler, Jim Croce, Bonnie Raitt and Frank Sinatra. He teamed up with producer Thom Bell and recorded on such Spinners classics as “Then Came You,” “Games People Play” and “The Rubberband Man.” He was also very proud of his work on the Jimi Hendrix album Crash Landing. In his incredible career, Babbitt has earned 25 gold and platinum records and played on more than 200 top 40 hits, from Gladys Knight & the Pips’ Grammy ® Hall of Fame hit “Midnight Train To Georgia” and the Manhattans “Kiss And Say Goodbye” to Barry Manilow’s “Ready To Take A Chance Again” and Elton John’s “Mama Can’t Buy You Love.”In 2002, Babbitt, representing himself and the legacy of James Jamerson, was the featured bass player in the Artisan documentary film Standing In The Shadows Of Motown, based on a book of the same name that told the then-little-known story of the Funk Brothers band. The film won Best Non-Fiction Film at both the 2002 New York Film Critics Circle, and the 2002 National Society of Film Critics. The soundtrack, released through Universal Music Enterprises, earned the Funk Brothers two Grammy ® awards in 2003 for Best Compilation Soundtrack Album for a Motion Picture, Television or Other Visual Media and Best Traditional R&B Vocal Performance, “What’s Going On,” an award they shared with Chaka Khan. Babbitt and other Funk Brothers attended the Grammy ceremony in New York City.In 2004, Babbitt, as a member of the Funk Brothers, was presented with a Grammy ® Lifetime Achievement Award by The National Academy of Recording Arts & Sciences. Babbitt appeared twice with the Funk Brothers on American Idol, in 2009 and in 2011; in between he was also a featured musician on Phil Collins’ 2010 album, Going Back. Bob was presented with his own “˜Star’ on the Nashville Walk of Fame just last week.

10 Ladies Anthems That Were Written By Men