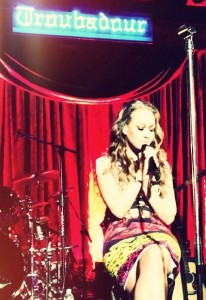 As the mother of two adorable children to he bright lights of the show X Factor, to a critically acclaimed debut album, Heaven, which was released in the UK,  Rebecca Ferguson has put Liverpool on the musical map.  Now touring the states in anticipation of her U.S. release of Heaven in May 2012 on Syco/Columbia Records, Rebecca is captivating the masses all over again with the divine uniqueness of her voice, humility, and style.On a rainy Wednesday evening in West Hollywood, she played a private show for an intimate crowd of Columbia record executives, acquaintances, and industry folk at the world-famous Troubadour on Santa Monica Blvd. In typical Rebecca Ferguson fashion she had the eclectic blend of Hollywood’s young and young at heart hanging on her every word.  On stage, she represents the very essence of what a music artist should be, which is honest, passionate, talented, unique   and confidently humble. Rebecca Ferguson is the truth and with a voice and personality like that, everyone at the Troubadour got to witness a little bit of Heaven.