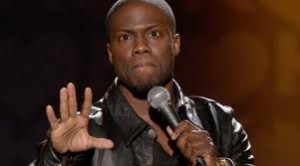 Quickly establishing himself as the pulse of comedic entertainment, funny man Kevin Hart, will bring his threshold of jokes and laughter to the 17th Annual American Black Film Festival (ABFF). Film Life, Inc. announced that Hart’s upcoming concert film “Kevin Hart: Let Me Explain” (Codeblack Films/ Lionsgate) will make its national premiere as the esteemed festival’s closing night film. Undoubtedly hilarious and primed to be a hit, ABFF is thrilled to deliver this comedic treasure to festival-goers on Saturday, June 22. The 17th Annual American Black Film Festival runs June 19 th to the 23rd in Miami, Florida.Hart, who hosted NBC’s’Saturday Night Live,’ this past weekend (March 2 nd), has been climbing his way to the top of entertainment in the same fashion as a young Eddie Murphy by using a three part platform inclusive of successful runs in stand-up, television, and film. Currently, Hart is the star of BET’s (Black Entertainment Television) mock reality series “Real Husbands of Hollywood,” a hilarious crack at the never-ending phenomenon we know as reality television. Having already garnered success with his film, “Laugh at My Pain,” (Codeblack Films) Hart’s new film, “Kevin Hart: Let Me Explain” is a cinematic echo of his triumphant 2012 comedy tour’Let Me Explain,’ which sold 540,000 tickets and generated $32 million in ticket sales. It is unquestionably one of the most successful comedy tours of all time, and has helped to establish Hart as one of the biggest names in entertainment.Hart was one of the stars of last year’s hit movie “Think Like a Man,” (Screen Gems), a relationship flick based on the Steve Harvey book of the same title. “Think Like a Man” producers Will Packer & Rob Hardy (Rainforest Films), along with its director Tim Story and cast, were honored last year by Film Life Inc. at the 16th Annual American Black Film Festival for its theatrical success. The film’s monumental run at the box office gave a bigger wingspan to the plight of preserving and ensuring black voices in cinema. Hart’s performance in the movie, along with its incredible cast, helped procure the film’s nearly 100 million dollar box office gross “”a welcomed rarity for movies specifically targeted at African American audiences.”We’re excited to have’Let Me Explain’ with us at this year’s festival for its national premiere. We couldn’t be more pleased about the opportunity. We admire Kevin Hart and have been watching his career flourish throughout the years. He’s been a long time supporter of the festival and an inspiration to comedians and filmmakers everywhere, and we know that this movie is an incredible way to close out what we are certain will be an excellent year of commemorating black film,” said Jeff Friday, ABFF Founder and CEO of Film Life, Inc.