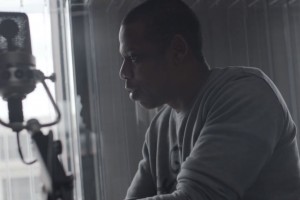 Although many people complained that the Samsung App wasn’t working and they couldn’t get a hold of Jay-Z’s new Magna Carta Holy Grail as quick as they wanted it, once they got it, they didn’t seem to be disappointed at all.If  you go on twitter right now and put in the hashtag #MCHG, you will see for yourself that for the most part, fans, critics, bloggers, and even grandmothers are loving what Jay-Z has done with this album. Hot 97’s Funkmaster Flex actually streamed the entire album last night on s special show.I heard most of the album last night and I what I like personally like about Jay-Z’s music is that the content has grown up with him. He discusses his insecurities of becoming a father, he questions his faith, he talks about loving Beyonce, and of course he still reflects on his drug-related past.As we all know, the marketing for this project was brilliant and dropping it one minute after midnight on July 4, 2013 for free with Samsung was another testament that Jay-Z is playing in the championship while most other artists are still running a scrimmage. It’s just true. Tell us what you think of the album.