Radio Facts: At first I thought, what is this sh…. Dammit it’s too early in the morning for this foolishness… Then I heard his vision and saw that he was serious and that this brother is intelligent and he has great communication skills.   Perhaps he will start a new trend and the hip hop music community, I think, will certainly be supportive. OK, I concluded think it’s a great idea. Just don’t give cousin Jaquan “Man Man” Jones a job as your campaign manager (lol) Then again, maybe he should. You know I love innovative black thinkers… All 5 of them. NBC Nightly News Chicago reports on Che “Rhymefest” Smith’s entry into the race for Chicago’s 20th Ward Alderman. The 20th Ward serves Woodlawn, Park Manor, Washington Park, Englewood, New City, and Back of the Yards.” – NBC. Shouts to Team Rsinal Inc 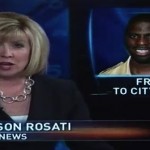