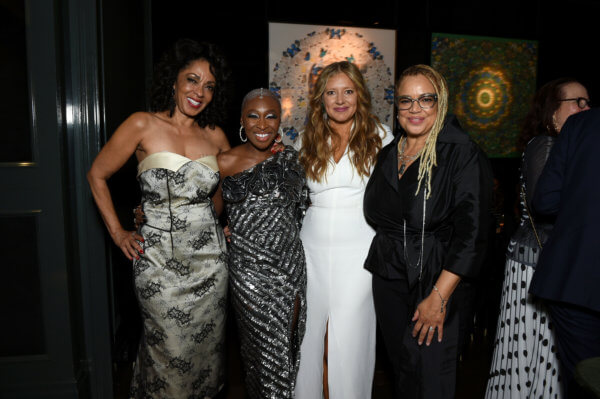 (Los Angeles) – The African American Critics Association (AAFCA) and the family of legendary director Stanley Kramer announced that the women behind the Focus Features’ most recent box office hit film, Harriet, will receive this year’s AAFCA Stanley Kramer Award for Social Justice.The first-ever big-screen film on the iconic Harriet Tubman, who not only escaped her own enslavement but traveled back frequently to free others, recently crossed $40 million at the box office. Starring Cynthia Erivo as the revered freedom fighter, Harriet, whose other esteemed cast members include Vanessa Bell Calloway, Janelle Monáe, Leslie Odom Jr., Omar Dorsey, Clarke Peters and Vondie Curtis Hall, has defied the odds by proving that films about strong women, particularly those of color, can and do resonate widely. For her performance, Erivo recently received two Golden Globe® nominations including Best Actress in a Motion Picture – Drama and Best Original Song “Stand Up,” which she co-wrote with songwriter Joshuah Brian Cbell.  Most recently, she was nominated for a Screen Actors Guild Award® for Outstanding Performance by a Female Actor in a Leading Role.In addition to Erivo, her co-honorees include acclaimed Harriet director/co-writer Kasi Lemmons, who enthralled the film world with her searing 1997 debut Eve’s Bayou, as well as producers Debra Martin Chase and Daniela Taplin Lundberg. Both producers have a strong body of work which includes The Princess Diaries franchise and Beast of No Nations respectively.Now, in its fourth year, the AAFCA Stanley Kramer Award for Social Justice recognizes filmmakers who work in the vein of Kramer who left a robust film legacy of such socially conscious films as Guess Who’s Coming to Dinner, The Defiant Ones, Inherit the Wind and Judgment at Nuremberg challenging the critical social issues of the day. Previous winners include Quincy Jones, Rob Reiner and Sidney Poitier. Similarly, Harriet star Cynthia Erivo, director/co-writer Kasi Lemmons and producers Debra Martin Chase and Daniela Taplin Lundberg created a film that embodies that.“This is the year of the woman – and no one epitomizes that more than the true story of Harriet Tubman. Her escape from slavery and transformation into one of America’s most renowned freedom fighters shows her fierce passion and courage,” shared Kramer’s widow Karen via statement. “The prestigious Stanley Kramer Social Justice Award is presented to Cynthia Erivo and the remarkable director/co-writer Kasi Lemmons and producers Debra Martin Chase and Daniela Taplin Lundberg who brought Harriet to life. Thanks to their collective efforts, Erivo’s riveting performance leaves no doubt that Tubman’s contributions go beyond gender and ensure that she will be forever hailed as one of our nation’s MOST important “sheroes.”The award will be presented on January 22, 2020, during the 11th AAFCA Awards at the Taglyn Complex in Hollywood.“It has been our privilege to partner with the Kramer family to recognize artists who understand the power they possess and who use it to move society forward. AAFCA is absolutely thrilled to salute the women who created the first-ever big-screen biopic of the incredible Harriet Tubman who was an amazing social leader and trailblazer. Her courage, conviction and sacrifice is a testament to the best of the human spirit.”For more information on AAFCA, please visit AAFCA.com.

admin - January 5, 2021 0
(Photo by Evan Agostini/Getty Images)En VogueThis group had some the best harmony you would ever hear from a female group or any group for that matter. [...]