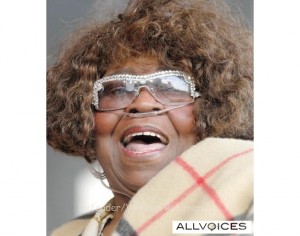 Many of you may have already been informed that Gospel Legend and The Undisputed Queen Of Gospel Music, Ms. Albertina Walker has been called home to be with the Lord at approximately 4:30 am. this morning. Albertina Walker, founder of The Caravans, arguably The Greatest Gospel Group Of All Time and heralded as an unparalleled launching pad for gospel superstars: Shirley Caesar, Inez Andrews, Bessie Griffin, Dorothy Norwood, Cassietta George, and The King Of Gospel, James Cleveland were but just a few of the ensemble’s alumni who later went on to solo fame. In 1955, The Caravans were signed to Savoy Records. By 1956, the Caravans were among the most popular acts on the gospel music circuit due in part to their ethereal, amazing vocal interplay and strong alternating leads.The Caravans disband ed in the mid-’70s, though there were occasional reunion tours. The’70s saw Ms. Albertina Walker re-signed with Savoy Records releasing such LPs as “Please Be Patient With Me” (her first Grammy-nominated album), “I Can Go to God In Prayer,” “Spread the Word,” “I Wont Last a Day Without You.”In 2005, Albertina Walker, the “Queen of Gospel Music,” Dorothy Norwood, “The World’s Greatest Gospel Storyteller,” Inez Andrews,”The High Priestess,” Deloris Washington, “The Sweet Songbird,” and “The First Lady Of Gospel,” Pastor Shirley Caesar were reunited for an exclusive “live” performance and in-depth behind the scenes interview in the taping of “Gospel Legends,” Malaco’s widely successful 3 CD & 3 DVD television package that united all of the Gospel pioneers of the last 80 years with current Gospel superstars, in which all 5 of the remaining Caravans appeared on one of the covers.In 2006, Albertina Walker was reunited once again with her royal court to record the Grammy, Soul Train, Stellar and Dove nominated release “Paved The Way” for Malaco Records with three of the four other anointed, living legends from The Caravans. The CD was recorded at Chicago’s West Point Baptist Church, which brings things full circle … at least for Albertina Walker. West Point Baptist Church is Albertina Walker’s home church, where she first sang in the children’s choir at the age of 4, with the support and instruction of giants of the genre such as Thomas A. Dorsey, Mahalia Jackson and James Cleveland (who was a childhood friend).The Savoy Records / Malaco Music Group relationship with The Queen, Albertina Walker has spanned over 55 years.”When we started out, money was the last thing on our mind; we just wanted to lift up the name of Jesus, we wanted to praise Him. We were Christian women and men who wanted to praise the name of the Lord, to lift him up, not ourselves. I knew this is what the Lord wanted me to do – to recruit singers: take them across the country; let the world hear Gospel music; let the people enjoy Gospel music; let people be saved through Gospel music. It took a long time but I appreciate all of the good, nice things that the Lord has given me. The Lord is my keeper, He is my all in all and whatever good that happens to me – God did it.” – Albertina WalkerWe will miss you Queen!!!Funeral arrangements will be forthcomingFor more information on The Queen, Albertina Walker, please go to www.malaco.com?