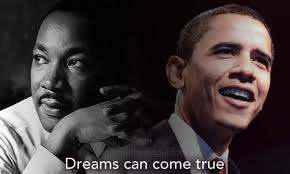 Bounce TV’s Martin Luther King Day Celebration on Monday, Jan. 21 will include live coverage of the 57th Presidential Inauguration as President Barack Obama takes his second oath of office, starting at 11:00 a.m. (ET). Bounce TV will also honor MLK Day with two special primetime documentaries:KING: MAN OF PEACE IN A TIME OF WAR (6:00 p.m./9:30 p.m.) The moving 2007 tribute to Dr. King, Jr. features rare footage from a 1967 interview in which he candidly discusses civil rights and the issue of black participation in the Vietnam War. With additional exclusive interviews with Rev. Jesse Jackson and retired general and former Secretary of State Colin Powell, KING: MAN OF PEACE IN A TIME OF WAR provides fresh insight into the life and personality of the late civil rights leader. BROADCAST PREMIEREPRESIDENT BARACK OBAMA: THE MAN AND HIS JOURNEY (4:00 p.m./7:30 p.m.) documents President Obama’s life and career. This inspirational story is a tribute to the first African American president of the United States, from his early days, through his run for the White House in 2008.Martin Luther King III and Ambassador Andrew Young are among the Founding Group and Board of Directors of Bounce TV. Bounce TV is majority African American-owned.

Radio FactsDecember 12, 2013September 18, 2022
December 12, 2013September 18, 2022
FacebookTwitterInstagramYoutube
We use cookies on our website to give you the most relevant experience by remembering your preferences and repeat visits. By clicking “Accept”, you consent to the use of ALL the cookies.
Do not sell my personal information.
Cookie SettingsAccept
Manage consent