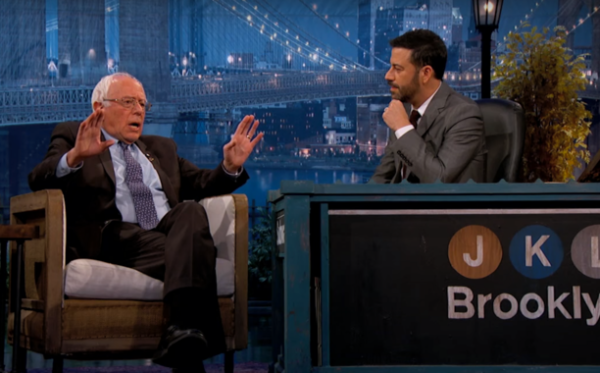 Bernie Sanders is making headlines these days as the radical socialist democrat looking be the next President of the United States. He has been drawing extremely high numbers of crowds to his campaign rallies and for a good reason. Bernie Sanders has been addressing issues that most candidates tend to stay away from. He talks about ending mass incarceration, he wants free healthcare, free college, and he wants rich people to pay for it. With a campaign like that no wonder he is drawing large numbers of people to his cause. One other thing to point is that Bernie Sanders is doing all of this without any super pac backing. He refuses to be controlled by Wall Street.
Last night Bernie made an appearance on the Jimmy Kimmel show and the topic of marijuana came up. Jimmy was mostly interested in if Bernie felt it should be legalized. Bernie used the moment to not only speak on the legalization of marijuana, but he also spoke about mass incarceration and the families that have been destroyed ever since Ronald Reagan deployed the “War on Drugs.” Check out the clip below to see what else the next President hopeful had to say.
https://youtu.be/kQCSySro5Tc