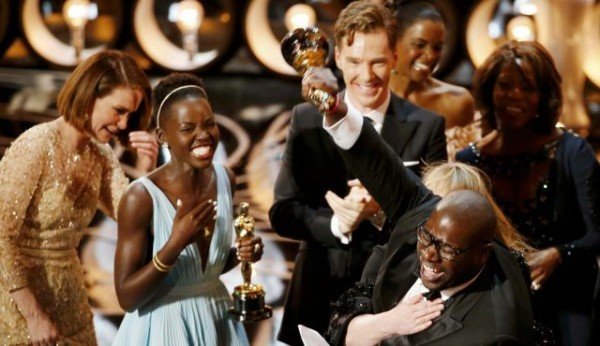 Not only did 12 Years a Slave director, Steve McQueen use his acceptance speech to speak up about modern day slavery that still exists around the globe, but he also took a small but significant stand for public schools.

In celebration of the National School Boards Association’s (NSBA) partnership with New Regency, Penguin Books, and the filmmakers to distribute “12 Years a Slave” to public high schools, NSBA congratulates the film’s Director Steve McQueen for winning the 2014 Academy Award for Best Picture. McQueen visibly wore the NSBA “Stand Up 4 Public Schools” red campaign wristband as he accepted the Oscar on behalf of filmmakers, cast and crew.
NSBA’s “Stand Up 4 Public Schools” campaign centers on creating world-class public schools, governed by school boards, to ensure that all students have the opportunity to learn 21st century skills and are prepared for higher education and the workplace.
“We are honored that Steve McQueen shared our wristband with the world at the Academy Awards in support of strong public schools,” said NSBA Executive Director Thomas J. Gentzel. “The red wristband sends a powerful message about the importance of standing up for America’s public schools to help every child achieve world-class standards and a brighter future.”

The “12 Years a Slave” partnership initiative is coordinated by Montel Williams, a featured celebrity spokesperson for the “Stand Up 4 Public Schools” national campaign. NSBA will assist in distributing an edited version of the film, book, and study guide to “12 Years a Slave” nationwide in September 2014. This version will be appropriate for high school classrooms and each school district can decide whether and how to utilize the resources.

“Since first reading ’12 Years a Slave,’ it has been my dream that this book be taught in schools. I am immensely grateful to Montel Williams and the National School Boards Association for making this dream a reality and for sharing Solomon Northup’s story with today’s generation,” said McQueen.
NSBA President David A. Pickler attended the Academy Awards and met McQueen on the red carpet before the event. Pickler gave McQueen the wristband to wish him luck and as a sign of support for the partnership and the film.