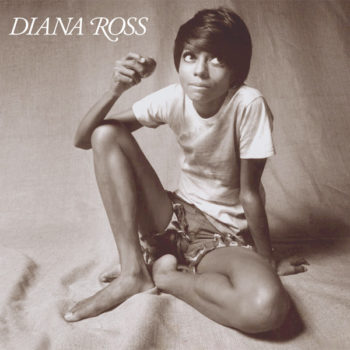 “I send this special gift to you all. This collection of songs is from my heart to yours and I send my love and thanks and appreciation to you for my joyous amazing journey, it’s so much fun,” says Ms. Ross.

Diana Ross will receive the Lifetime Achievement Award at the American Music Awards on November 19, during which the show will pay tribute to her remarkable career. Diana Ross’ impact in music, film, television, fashion and popular culture is unprecedented. A renowned superstar, she is one of the most successful and influential recording legends and iconic entertainers of all time.

Starz’s most watched series “Power: The Complete Third Season” is out now on Blu-ray and DVD. With record-breaking ratings for its premiere, season three — with its all-star cast, including Omari Hardwick (TV’s ”Being Mary Jane”), Curtis “50 Cent” Jackson (The Hangover), and Naturi Naughton (TV’s “Mad Men”) — finds James St. Patrick fighting to maintain his new lifestyle on the right side of the law.

From Executive Producer Curtis “50 Cent” Jackson and show creator Courtney A. Kemp (“The Good Wife”) comes season three of the hit drama, “Power.” “Power: The Complete Third Season” Blu-ray and DVD special features include a recap of season two and an inside look at the making of the show.

Meet the Blacks Comes to DVD with Great Special Features 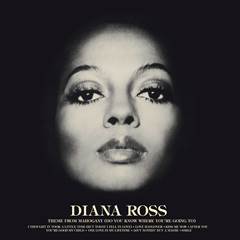 Los Angeles, CA – July 5, 2016 – Diana Ross was six years into her wildly successful solo career from the Supremes when she outdid herself, releasing a self-titled project, her seventh studio album, that included two No. 1 pop smashes, “Theme from Mahogany (Do You Know Where You’re Going To)” and the dance-floor classic, “Love Hangover.” Ms. Ross also took two more tracks from the album up the charts, “I Thought It Took A Little Time (But Today I Fell In Love),” which hit the top five ofBillboard magazine’s Easy Listening (now known as Adult Contemporary) chart, and “One Love In My Lifetime,” no. 5 on the Soul charts. Diana Ross, the album, peaked at no. 5 on the Billboard 200, no. 4 on the Soul album chart and no. 5 in the U.K

Marking 40 years from its original Motown release in February 1976, UMe is reissuing Diana Ross in vinyl for the first time since then on July 15, following a 2012 two-CD expanded set on the Hip-o-Select/Motown label.

“Theme from Mahogany (Do You Know Where You’re Going To)” was taken from the soundtrack to the Mahogany film, a Ross vehicle that followed her Oscar-nominated role in Lady Sings The Blues. A cover of a Thelma Houston recording from 1973, the song anchored a romantic drama, produced by Motown and directed by Berry Gordy, in which Ross, as Tracy Chambers, a poor woman from the Chicago projects who works her way up from salesgirl to supermodel, becomes a famous fashion designer. Written by Michael Masser and Gerald Goffin, “Theme from Mahogany” hit No. 1 on the Billboard Hot 100 and the Easy Listening (AC) charts, and received an Oscar nomination for Best Song. It had already been weeks past its No. 1 status when included on the Diana Ross album and, on March 29, 1976, when Ms. Ross performed it live via satellite from the Netherlands on that year’s 48th Academy Awards telecast.

Ross was on top of the world, as “Love Hangover” from Diana Ross was the U.S. No. 1 pop song the same week as the Oscars. “Love Hangover” was an accidental hit, rush-released while the album’s first single, “I Thought It Took A Little Time (But Today I Fell in Love),” was on its way up the charts, to circumvent a competing version by The 5th Dimension. Written by Pamela Sawyer and Marilyn McLeod as either a ballad or up-tempo track, the song was famously recorded as both and cut together, creating an unforgettable backing track for Ms. Ross’ unforgettably sexy vocals. Producer Hal Davis created a comfortable atmosphere for Ms. Ross, installing a strobe light in the studio, which elicited from her a playful, sensual performance. When “Love Hangover” reached No. 1 on the Billboard Hot 100 for two weeks – it also hit No. 1 on the Soul and Dance/Disco charts – it was Ross’s fourth chart-topping solo single, breaking the then-record for most number one hits by a female vocalist, a record eventually broken by Whitney Houston in 1988 and Madonna in 1990. The song was eventually nominated for a GRAMMY® for Best R&B Female Vocal Performance. And it reappeared at the top of the charts as the sampled foundation of “The First Night,” a No. 1 hit for Monica in 1998.

The fourth hit from Diana Ross, “One Love in My Lifetime,” written by Lawrence Brown, Terri McFadden and Leonard Perry, hit the Top 10 on the U.S. Soul chart and peaked at 25 on the Pop chart. The song was covered by Joss Stone for her 2012 album, The Soul Sessions Vol. 2. Among the other album highlights are Ross’ swooning, romantic take on the Charlie Chaplin classic, “Smile,” which closes the record.

Ross performed many of the songs from the album on her subsequent tour, which resulted in the 1977 live album, An Evening with Diana Ross, a Broadway run that won a special Tony® Award, and an Emmy®-nominated TV special.

Diana Ross in its 40th anniversary remains a music staple, made all the more iconic by its extraordinary close-up cover shot by famed fashion photographer Victor Skrebneski – an image that differentiates the album from Ms. Ross’ other self-titled album, her solo debut in 1970, which featured a full-body shot by another renowned photographer, Harry Langdon.

1.“Theme from Mahogany (Do You Know Where You’re Going To)” 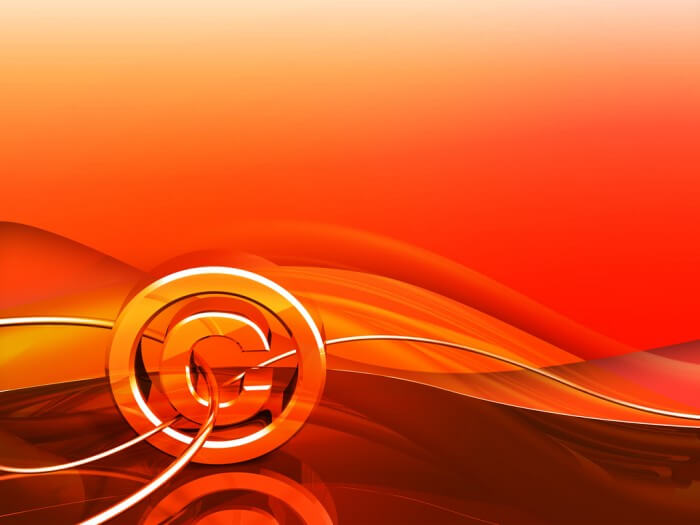 Rightscorp (OTCQB: RIHT), the leading provider of monetization services for artists and holders of copyrighted Intellectual Property (IP), announced today that it has secured a representation agreement with The Royalty Network to represent and monitor its copyrighted songs and other assets against online copyright infringement. The Royalty Network, currently celebrating its 20th anniversary, is recognized as one of the music industry's most powerful music publishing firms.The Royalty Network has an impressive roster of top songwriters, producers, and artists; its catalogue continues to grow every year. Artists' songs represented include Beyonce, Calvin Harris, Kanye West, Lil' Wayne, Kendrick Lamar, and many other notable acts. In addition, the Company represents songs in film and television shows including "The Hangover" and "American Idol". Much like Rightscorp, The Royalty Network makes it a priority of informing artists, songwriters, and producers about copyright ownership, and educating their clients on how to monetize their copyrights. The Royalty Network maintains a blog with tips regarding royalties, actively attends conferences, and participates on panels to educate executives--as well as up-and-coming artists--on the importance of copyright ownership."We are thrilled to partner with The Royalty Network to help protect their growing catalog of copyrighted works," said Christopher Sabec, CEO of Rightscorp. "Content owners continue to discover that our monitoring service is the best viable solution to protect their assets from illegal infringement and ensure that they are compensated for any infringements that do occur. The Royalty Network is a major force in the music industry and has an excellent reputation for its business practices, as well as attracting and working with some of the biggest superstars in the world. At the core, our two companies are very much aligned in our thinking. We want to inform and protect the copyright holder from infringement and loss of revenue. The Royalty Network's reputation for client satisfaction makes it a sought after place for artists, songwriters, and producers. We look forward to building this business relationship, which I believe will be very fruitful in the years to come." 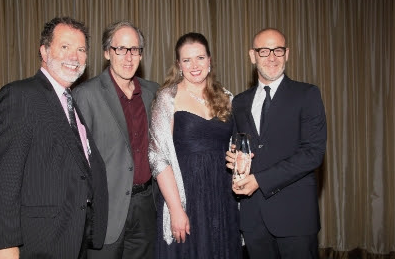 SESAC's Dennis Lord, composer Jeff Beal, SESAC's Erin Collins and Netflix's Peter Friedlander during the "Visionary Award" presentation[/caption]SESAC, the nation’s most innovative performing rights organization, honored its remarkable roster of top film and television composers with the annual sesac Film & Television Composers Awards Dinner. The invitation-only event which was held June 4 at the beautiful Casa Del Mar Hotel in Santa Monica, Calif., celebrated the composers of music featured in 2013’s biggest films, primetime television shows and cable programs.The sesac event bestows awards to music composers in the categories of Network TV, Local TV, Cable TV, Film Composing and Jingles. sesac also acknowledged and honored composers for excellence in Streaming Music, marking the first time ever a PRO has acknowledged and awarded the music in streaming media outlets.With more than 60 awards given during the evening, some of the industry’s most highly rated shows were honored, including Grey’s Anatomy, Mike & Molly, Save Me, Parenthood, Two And A Half Men, How I Met Your Mother and 2 Broke Girls among many others.A major highlight of the evening was the presentation of the Visionary Award presentation to Netflix in recognition of “exceptional creativity and innovation in entertainment media.” Netflix, the world's leading Internet television network with over 48 million members in more than 40 countries, was also cited for its original series, House of Cards, which features the music of sesac composer Jeff Beal. (FOR MORE PHOTOS AND HONOREES CLICK NEXT) [caption id="attachment_137513" align="aligncenter" width="398"] 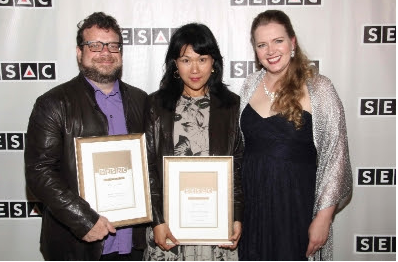 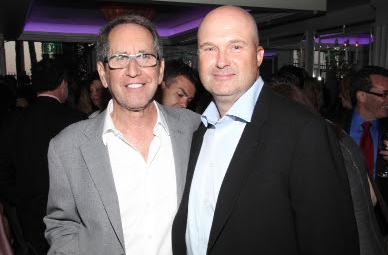 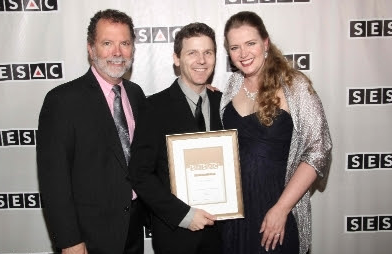 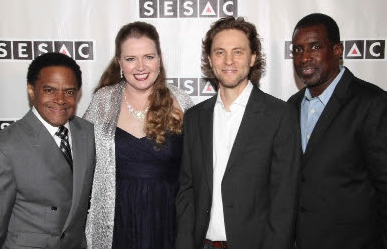