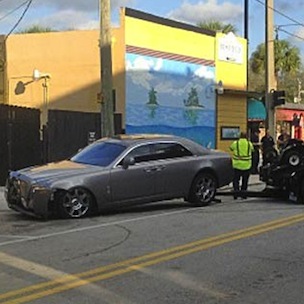 Is this another example of life imitating art? Reports are in that this morning in South Florida, while trying to escape gunfire from a shooter in another car, Rick Ross crashed his Rolls Royce into a building.Sources, including TMZ.com, report that the Maybach Music Group leader was attacked on Fort Lauderdale, Florida’s Los Olas Boulevard, near 15th Avenue, when another vehicle pulled alongside his Roll Royce and began letting off rounds. Neither Rick Ross, real name, William Leonard Roberts II, nor his female passenger were struck by the gunfire. Sources say over a dozen rounds were fired by the perpetrator. While accelerating away from the shooters, Ross, who is believed to have been driving, crashed his Rolls Royce Phantom into a building.Local10 acquired a photograph of the wrecked car. The Fort Lauderdale Radio Station also reported that a witness claimed that Ross looked “shaken up” following the crash. At present, no arrests have been made or suspects have been named.