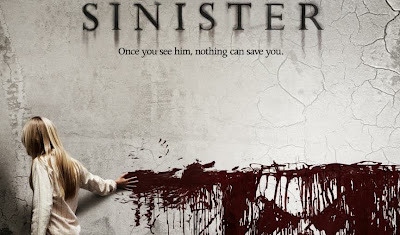 Nothing says you are about to watch a horror film like an opening scene of a family of four, hands tied behind their backs and sacks over their heads. Sinister is a very small but very effective horror film that goes the distance in doing what horror movies are made to do ““ scare the crap out of the audience.Ellison Oswalt (played well by Ethan Hawke) is a non-fiction crime writer who moves his wife Tracy (Juliet Rylance), his son Trevor (Michael Hall D’Addario) and daughter Ashley (Clare Foley) into a new home that sets in a rural area. They are greeted by the local sheriff (Fred Dalton Thompson) who makes it quite clear that he is no fan of Oswalt and warns Oswalt to pack his family up and move back to where they came from ““ of course Oswalt refuses.In a nutshell, Oswalt is trying to recapture his writing mojo which he hasn’t seen in ten years. He takes it up a notch by moving his family into the home where four family members were murdered; the child of the last slain family is still missing. We soon learn that this is his rediscovered motivation and part of the catalyst for his new book; however, he has not revealed to his family what has taken place in their new home.In the attic, Oswalt discovers a projector and a box of eight-millimeter home movies. When he fires up the projector and runs the movies, he discovers that the disturbing murders of five families have been captured on the footage. Oswalt is quickly entranced by the find and queues up more footage.In the interim”¦ Oswalt’s daughter is trying to adjust while his son is having night terrors that cause him to sleep walk and “˜turn up’ in places that evoke explosive screams from the audience at a moment’s notice. It’s not long before Oswalt is hearing things go bump in the night but he keeps the old footage rolling. Suddenly he realizes that he might have a glimpse of the suspected serial murderer on one of the footage reels; a glimpse that’s all too creepy in its own right. Oswalt soon realizes that this same sinister figure is present at all of the filmed murdersOswalt enlists the help of a quirky local deputy (James Ransone) to help do some research into the victims, which he is more than happy to do behind the sheriff’s back. The deputy leads Oswalt to a local professor (Vincent D’Onofrio) who studies ritual murders; Oswalt shares a symbol with the professor that was found at the murder scenes. The professor informs Oswalt that the symbol relates to a Babylonian myth about a human-like figure that was an eater of children. Oswalt learns that this being has the power to possess the children.The spirits of the missing children, from each case, start to appear in the house but Oswalt can’t see their gruesome little faces but only feels their presence and hears hints of their motion.Oswalt’s home life deteriorates ““ his son’s episodes increase, he continues to drink heavily and his wife discovers the history of their new digs to boot. As the presence of fear and death mount, Oswalt finally decides that it’s time to get his family out of that house;  he moves them to a new home, only to discover that he hasn’t escaped yet.The film roars to a climactic end that is truly fitting for such a macabre undertone.Sinister is what I would call a breath of fresh air for the genre. The compact but effective storytelling grabs the viewer from frame one and has you on the edge of your seat more often than not. Simply put ““ be prepared to jump and scream, yet enjoy an interesting plot.Various things come together to make this film a very entertaining and borderline unsettling experience. Most notably, the fact that you get to witness old, raw footage of happy families then witness the final moments leading to their deaths ““ gave me chills. The use of music during the film and playback of the eight-millimeter footage added a nice stylistic touch that more than did its part in escalating the film’s eeriness. And let’s not forget the actual face of Sinister himself”¦ not overdone, yet just enough to make the viewer excited to get past seeing his face.The directing was close to top shelf, as far as this genre goes, and I appreciate the ability to get the viewer right in the house with the family as they go through this very scary situation. The casting of Ethan Hawke was a great add as he was easily able to bring his form of understated charisma to the part. Also notable was Michael D’Addario’s ability to pull off the emotion to convey an adolescent who was dealing with night terrors.Overall I think it was as uncanny as it was entertaining, although I think the marketing drive for the film was under approached. Just in time for Halloween, word of mouth should get lots of viewing traffic which should produce quite a few dollars in the coffers by the time the film is through making its run.