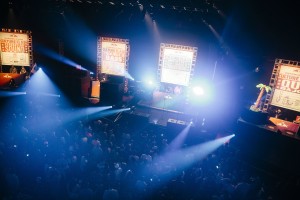 21 ground-breaking events in NYC, with 17 more to come — Lectures from Brian Eno, Beatles producer Ken Scott, rap legend Rakim and many more — Premiere of a documentary short film about iconic record label DFA – Daily free music paper distributed across the city -The Red Bull Music Academy has just completed the first term of its 2013 tenure in New York, adding its own signature to the city’s rich music scene with an array of concerts, club nights, exhibitions, workshops, and lectures with legendary music makers. Highlights included watershed events like the cross-genre sound battle Culture Clash ““ “one of New York’s best nights ever” (MTV Iggy), an audiovisual installation by Brian Eno, and a festival-within-a-festival of drone and noise music at Queens’ spectacular Knockdown Center. Meanwhile, a 13-minute-long documentary film about the seminal NYC label DFA Records premiered on www.redbullmusicacademy.com, alongside select highlights from the Daily Note, a music paper on New York music and culture, distributed daily around town.Last Thursday saw the first-ever Red Bull Music Academy Culture Clash in NYC shaking the foundations of Roseland Ballroom. Four sounds were pitted against each other on four stages: Just Blaze and Young Guru, the main architects of Jay-Z’s biggest hits; reggae and dancehall DJs Federation Sound; tropical bass collective Que Bajo?!; and the Trouble & Bass posse, who were victorious thanks to their wide-ranging arsenal of club hits and high decibel on-stage antics. Surprise guests included hip-hop music heavyweights Bun B, 2 Chainz and Raekwon (on Just Blaze and Young Guru’s stage); dancehall singers Spragga Benz and Tifa for Federation Sound; house diva Robin S. (“Show Me Love”) for Trouble & Bass; and Guyanan MC Jahdan Blakkamoore for Que Bajo?! Undoubtedly a historic event for New York City nightlife.A big part of the Red Bull Music Academy is the exchange of knowledge between genres and generations. Term one of the New York Academy has seen plenty of such information inspiration, including a discussion of David Bowie’s music by influential producers who worked with him: Nile Rodgers, Tony Visconti and Ken Scott; and a public lecture by the queen of future vintage soul, Erykah Badu. One of the many lectures that can be viewed on the Red Bull Music Academy website includes a conversation with pioneering artist, composer, and producer Brian Eno. His talk yielded unexpected insights on wide-ranging topics like spiritual surrender and what he’ll one day be remembered for. The East Coast debut of his generative work 77 Million Paintings, presented as part of the Red Bull Music Academy program, creates ongoing permutations of visual and sonic elements. The result is “between music and painting” and can still be viewed at Manhattan’s 145 W 32nd Street until June 2 nd.The Red Bull Music Academy also premiered a documentary film about iconic NYC record label DFA Records last week, titled Too Old To Be New, Too New To Be Classic. Directed by Max Joseph and narrated by Marc Maron, it features music and appearances from James Murphy and LCD Soundsystem, The Rapture, Holy Ghost!, Juan MacLean, and many more.As always, the Red Bull Music Academy also provided a platform for the innovative music of tomorrow, as up and coming musicians and producers from 29 countries worked on tracks under the guidance of tutors such as electronic visionary Four Tet and beats pioneer Flying Lotus (an Academy alum). Studio sessions were facilitated in nine custom-built studios in a Chelsea building refitted by architect Jeffrey Inaba. Songs recorded during the session will be available later this year on www.redbullmusicacademy.com.In the NYC metro area, commuters and pedestrians have grabbed copies of the highly collectible Daily Note newspaper, put together by some of New York’s most respected music writers and illustrators. 75,000 copies of the papers are distributed on each Academy weekday through May 31 st, covering a broad range of cultural topics from the early days of the hip-hop music’s internet to the backstories of some of the city’s most iconic logos and artwork. PDF copies can be downloaded from the Academy website.Throughout both terms RBMA Radio takes over the airwaves direct from Red Bull Music Academy’s New York HQ every weekday, transmitting a live special at 6pm Eastern Time. A special two-hour edition of the daily broadcast takes place each Thursday at 6pm in conjunction with New York’s East Village Radio, presented by Vivian Host, a former Academy participant and member of the Trouble & Bass crew, and Shawn Reynaldo, the editor-in-chief of influential online magazine XLR8R. Listeners can tune in worldwide at rbmaradio.com and eastvillageradio.com. Radio specials recorded in term one include an hour of street basketball-influenced jams with DJ and radio personality Bobbito Garcia, and a recording of Academy participant Koreless’ live set at Webster Hall on May 8 th.