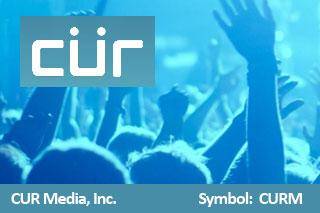 CÜR Media, Inc. announced that it has released the initial Beta testing version of its CÜR Music for Web. CÜR Music is the Company’s next generation social music streaming application expected to launch later this year on mobile and web.
CÜR Media’s release of its Beta version for Web moves the Company another step closer to its planned launch of CÜR Music later in 2015. The new Beta version of CÜR Music for Web includes social features designed to create a fully immersive music experience for the user.
Tom Brophy, Founder and CEO of CÜR Media, commented, “We are excited to reach this latest phase in the Company’s ramp up toward product launch later this year. We have been receiving great feedback from our iPhone Beta testers and expect the same for our Web beta . With our Android Beta version coming shortly, we are more confident than ever that we are in the right place at the right time to move CÜR Music to the forefront of the music streaming industry for years to come.”