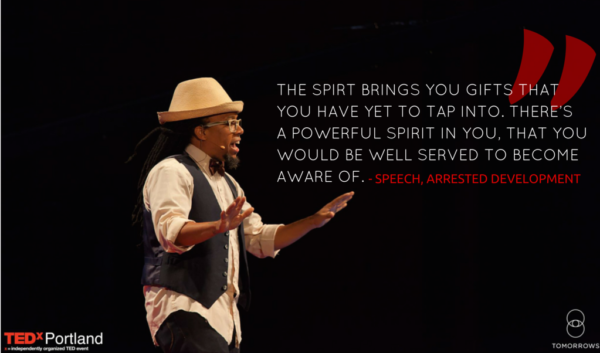 When you hear what Arrested Development lead singer Speech is up to these days, it will bring you right back to the period in time when his band sold four million copies of their debut album, won two Grammys, and was named “Band Of The Year” by Rolling Stone. Just as he brought conscious thinking to the public airwaves, giving voice to a Southern African-American experience in a way that was inspirational to people regardless of skin tone, Speech is offering up a vision for how to untangle our troubled world, in a positive way. Speech gave a TEDx Talk that will help transform how we think and treat each other. He enlightened the audience by challenging everyone to tap into a boundless, immeasurable resource.
Speech was the featured “closer” at this year’s TEDxPortland and got a rousing standing ovation in front of a packed house of 3100+ (and thousands more viewing online) to finish the day. Speech danced lyrically, bouncing back and forth from speaking to rapping, while filling in biographical holes few in his fan base ever knew. Just as his band’s debut album came out of nowhere, his TEDxPortland Talk got a broad universal reaction, resonating deeply in the moment that is now.
In his appearance, which was released as a video on the global TEDx YouTube channel on August 25, 2015, Speech unwinds the tale of his childhood and his favorite grandmother, with whom he spent every summer in rural Tennessee, in a house with no running water and only electricity borrowed from a neighbor’s extension cord. However, this scene, which became vivid in Arrested Development’s lyrics and music videos, was the birth of more than music. From these childhood origins, Speech picked up the seed, the core idea of his TED Talk.
“We all come to this earth with a certain gift, a certain talent, that we may or may not know is there,” says Speech. “It doesn’t matter whether you believe it is from God. But part of our journey is to find out what that gift is and then maximize that. It’s a Sacred Serial Number.”
Though Speech is a Christian preacher, he is taking messages that are universal and translating them into something appealing and useful regardless of one’s spiritual beliefs.
Before stardom, Speech cut his teeth with the standard posturing and brashness of hip-hop. When Chuck D and Public Enemy came along, Speech connected with the idea that you could transform the muscle-tensed art into something transformative. While having his eyes opened up to a renewed movement of self-determination, Speech realized icons of that movement already saturated the home of his mother, who runs Milwaukee’s longest-running newspaper published for African Americans.
The musical inspirations, his family heritage, and his grandmother’s Tennessee rural life came together in a playful way. Speech and his band mates put their own Southern spin and lore on it and Arrested Development was born. It’s this same ability to unite old and new ideas, taking concepts from one world and making them accessible to everyone, which Speech draws on in the speeches he is making today.
“When I speak to people, I know my audience is of all types of backgrounds,” says Speech. “I want to connect with people on our commonalities, with less emphasis on the things that divide. Whether I am rapping or speaking, I want to tie in our humanity, which coincides with spirituality, as opposed to just talking about problems. I also want to try to present solutions.”
So what is Speech’s Sacred Serial Number? “I describe mine as a unifier,” says Speech, “…as someone who is striving to unite people. I am here to help people to walk a mile in another person’s shoes, if that is possible to do; to help people have more compassion and empathy. That’s what I’m supposed to bring to the world.”