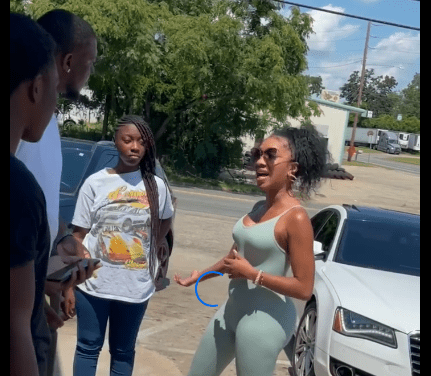 Filed under the category: “Friday Foolishness” This man is standing on the corner enjoying his fried chicken and french fries when he is interrupted by his daughter who is glad to see him. However, his ex/Baby mama is not glad to see him and she’s stating that she’s been calling him repeatedly and he has not returned her calls. She wants to know why? When he doesn’t provide a good answer, she commences to knock the crunch off his fried chicken as it flies out of his hands and onto its new home. The ground. He gets very upset, after all, it’s hard to find wings these days.

He’s looking at his food on the ground caring for it more than he does his children when the second baby mama arrives and asks where is her son’s chicken … because he likes chicken too.

The man doesn’t have an explanation so he decides to go in and buy them all chicken … but now the manager isn’t having it.

At first, I didn’t think this was real, I mean after all who is filming it. Then if you keep watching it does seem more realistic especially when the manager comes out and tells him to leave. If this is fake she should win an Oscar for her performance. Your thoughts?

OMG ? Man get Exposed for not taking care of his kids ?? Follow Cedric Vlogs