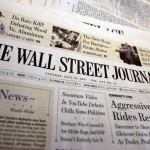 The Wall Street Journal Radio Network announced today plans to launch a new, live evening show called “The Daily Wrap from The Wall Street Journal with Michael Castner.” Scheduled to debut in spring 2011, the news, talk and opinion broadcast will originate from the Journal’s headquarters in New York City and air live each weekday from 6-9 p.m. ET. Journalist and radio personality Michael Castner has signed on as the show’s host.On “The Daily Wrap,” Mr. Castner will break down the major news and developments of the day on a range of topics, including U.S. and world news, politics, entertainment, health, technology, sports and more — with contributions and analysis from Wall Street Journal reporters, editors and opinion writers as well as newsmakers and special guests.”The Daily Wrap will showcase the breadth and depth of reporting and resources from across Dow Jones and The Wall Street Journal to serve high-quality news and analysis, interviews and opinion across myriad topics,” said Nancy Abramson, executive director of The Wall Street Journal Radio Network. “The show will complement the Journal brand — expanded content and scope, fascinating stories and new ideas — and provide an exciting new opportunity and alignment for advertisers.”The Wall Street Journal Radio Network currently serves more than 400 affiliates in the U.S. with breaking news, business, consumer spending and financial market news. Programming includes The Wall Street Journal Report, The Dow Jones Money Report, Watching Your Wallet, Barron’s on Investment, The Wall Street Journal This Morning and The Wall Street Journal This Weekend.”Michael Castner is a rising star in talk radio and will bring his unique voice and versatile skills to the mix for a compelling broadcast in a tone the audience will love,” added Ms. Abramson.”My goal for the show is to quickly and informally capture the essence of the day’s top issues,” said Mr. Castner. “I’ll be talking with reporters and opinion leaders who will share information and observations. We’ll look for unique details through conversation, not confrontation.”About Mr. CastnerMichael Castner’s television and radio career has spanned news, entertainment and politics. He currently serves as a host on WRNO-FM in New Orleans and WJBO-AM in Baton Rouge, La. He previously hosted the Nightside Project heard on KSL- AM/FM Salt Lake City, KTAR in Phoenix and Talk Radio 3WT in Washington DC., and served as news anchor for KFI-AM in Los Angeles.Mr. Castner began his on-air career with a local radio station in Texas and television stations in Idaho, Wisconsin and Texas. He then served as a television news correspondent for Tribune Broadcasting, covering the White House and State Department, followed by roles as a U.S. Congressional press advisor and communications director for the Utah State Senate. Mr. Castner returned to television and worked in London and New York as a reporter and producer for Entertainment Tonight and the syndicated show Everyday with Joan Lunden. Castner hosted his own talk show and Red Carpet coverage on E! Entertainment Television.

Stephen A.: Kevin Durant is on the clock | First Take

Tamar Braxton Opens Up About Relationship With David Adefeso On ‘Tamron...