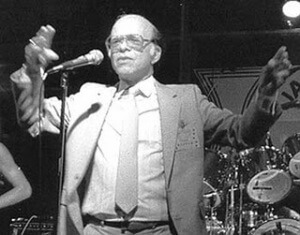 I am so blessed to have been a part of industry history, even though I didn’t know it then. It’s incredibly ironic that there if very little footage of Jack the Rapper conferences online. This video was done in the early 90s when the conference was headed in a whole new direction that ended up shutting it down. A little backstory about Jack the Rapper.

Why No Hip Hop at Jack the Rapper?

Jack was pressured into inviting the hip hop music community and many thought it WAS a rap conference because of the name.  It was an amazing event and it grew from an airport hotel in Atlanta to the Hilton then to the even bigger newer Mariott Marquis in downtown Atlanta, at the time, that had a HUGE atrium that went up almost 40 floors. I actually worked at the Marriot when it opened before I started in the industry as a room service waiter a couple of years before.During the last couple of years when the conference was in Atlanta, a Radio DJ on V103 announced the conference was in town on the air and all hell broke loose with a TON of non-industry people trying to get in. It changed the entire landscape of the event to see the stars.In the 80s the more exclusive industry event Jack the Rapper (Atlanta) with more seasoned industry people was AMAZING. I used to sneak in each year.At the time, I was working at WIGO (1340 AM) I left my job as a waiter at the Marriott making $750 a WEEK in the 80s to make a whopping $220 a MONTH working at WIGO… FULL TIME. I knew I was on the right track but my rent was $350 back then. WTF was I thinking?Me and the fellas like to call WIGO “Nam” (short for Vietnam). See when it came to paying people enough change to eat? The late Dorothy Brunson didn’t play that shit (lol). So me and the late Nate Quick (he did evenings and I did overnights). We were so hungry we used to go through the sales people’s desks and hope they left jelly packets from McDonald’s for us to eat. I kid you not. We were STARVING. Dorothy Brunson was MEAN… Ooooh, that woman was mean. She was so damn mean that if you spoke to her, you might be lucky enough to get a grunt for a response.She fired me and told me I had mental problems. I told her anybody that works for you would HAVE to have mental problems. Then I ran out of her office when she started huffing and puffing and she started scrapping her feet on the carpet like a bull ready to charge. I don’t think we ever spoke again (lol).Ready to quit before I got started working for Brunson, thank God Jack the Rapper saved the day and changed my perspective. I realized there were jobs in the industry that didn’t mind if a grocery store was not a foreign concept to employees and I KNEW I wanted to work in the music industry when I went to Jack the Rapper. I also knew I had to GTF out of WIGO.The very first person I saw at Jack the Rapper was Terri Avery (I don’t think I ever told her) checking in at the front desk of the hotel in Atlanta. I remember thinking, “That’s the lady that’s always in the Jack the Rapper magazine.” I thought industry people were stars back then.By the time Jack got to this era (video), we had stopped going. I actually went to the very last conference, it was very sad to see it diminish to that. I learned a LOT about business watching this conference over the years. What was really ironic, was that it was the industry people who didn’t want hip hop music at the event and we were supposed to be promoting the music but there was indeed resistance.Many rappers blamed the black industry for being resistant to the hip hop music genre in those days but they never knew the half of it. I would surmise … they probably know now. Enjoyhttps://www.youtube.com/watch?v=9QDGu-_CJZg