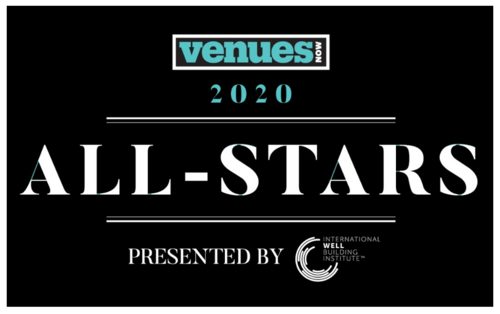 The list reflects the many sectors that make up the venue business ecosystem: building management, from clubs to stadiums and festivals; branding, sponsorship and sales; architecture and construction; concessions; technology; operations and security; and ticketing. Commissioners, building and franchise owners, college officials who influence arenas and stadiums, and content executives who supply the shows were all considered as well.

The VenuesNow All-Stars will be spotlighted in this special issue of VenuesNow, which prominently features eight top executives on its cover who are pushing the business forward in a variety of innovative ways. This includes Jose Mola, who oversaw the recent NBA Championship “Bubble” at ESPN Wide World of Sports at Walt Disney World; Brittanie Boyd, SVP of Marketing for the Philadelphia 76ers and chair of HBSE’s diversity and inclusion board; Kim Stone, GM of Chase Center who led the world-class arena’s GBAC Star accreditation and put together its health and hygiene department for safely reopening; and Mike Healy, SVP of venue operations and guest experience whose current bailiwick includes the MLB World Series presently underway at the new $1.2 billion Globe Life Field.

“From the major leagues to the major buildings; from innovators in technology to establishing new protocols in safety to advocates for diversity and inclusivity; from burgeoning sectors like eSports and sports betting; to performing arts centers and drive-ins, VenuesNow’s class of 2020 All-Stars is a case study in what excellence in our industry looks like,” said Rob Knapp, VenuesNow’s managing editor.

To come up with the 50 All-Stars, members of the VenuesNow editorial team researched candidates, vigorously debated their merits, and consulted key members of the industry for feedback. Factors included documented excellence, innovation, financial success, commitment to diversity, leadership in their field, and more.

VenuesNow is proud that more than a third of the 42 individuals among the All-Stars are women reflecting our increasingly inclusive industry.