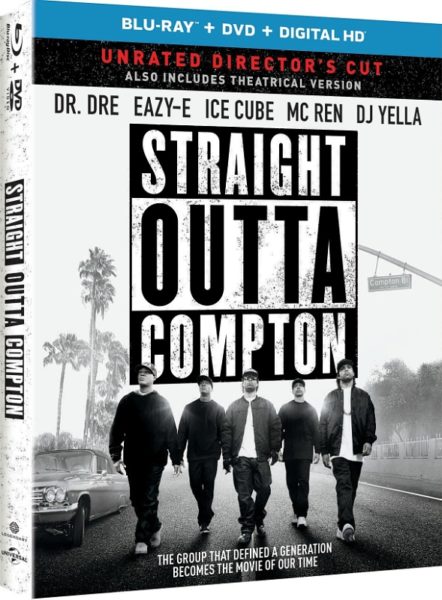 Follow the world’s most dangerous group, N.W.A. as they forge their anger and inner-city frustrations into the most potent weapon imaginable: their music. In Straight Outta Compton: Unrated Director’s Cut fans can follow N.W.A.’s electrifying lyrics and unique sound, which introduced a truth that no one had heard before and exposed life in the hood igniting a social revolution that still reverberates today. The culturally relevant and explosively entertaining biopic is coming to Digital HD on January 5, 2016 and Blu-ray™, DVD and On Demand January 19, 2016 from Universal Pictures Home Entertainment. The Blu-ray™ and Digital HD versions include the exclusive Unrated Director’s Cut that gives fans more of the N.W.A. story with 20 additional minutes of the film. Directed by F. Gary Gray (The Italian Job, Friday), Straight Outta Compton tells the true story of five young rebels from South Central Los Angeles who, armed with only their lyrics, swagger, bravado and raw talent, stood up to the authorities attempting to keep them down.With an 89% certified fresh rating on Rotten Tomatoes and hailed by critics as, “an electrifying piece of hip-hop history that speaks urgently to right now,” (Peter Travers, Rolling Stone), Straight Outta Compton bowed as the box office’s biggest R-rated August opening of all time and biggest musical biopic ever, grossing $60 million during its opening weekend and generating over $200 million worldwide to date.Following the rise of the world’s most notorious group, Straight Outta Compton features breakout stars O’Shea Jackson Jr. (Ice Cube), Corey Hawkins (Dr. Dre), Jason Mitchell (the late Eazy-E), Neil Brown, Jr. (DJ Yella) and Aldis Hodge (MC Ren) as members of N.W.A. and Golden Globe Award-winning actor Paul Giamatti (HBO’s John Adams) as the group’s manager.As the essential companion piece to the home entertainment release, Universal Music Enterprises (UMe) will release Straight Outta Compton: The Soundtrack. This new collection is the official soundtrack featuring key cuts from the film including “Quiet On Tha Set,” “Gangsta Gangsta,” “Express Yourself” and the explosive title track. In addition, Straight Outta Compton: Original Motion Picture Score will be released separately featuring music composed and conducted by Joseph Trapanese, and produced by Bryan Lawson and Joseph Trapanese. Both collections will release worldwide on all digital and CD formats on January 8, 2016, with Straight Outta Compton: The Soundtrack being pressed as a 2-LP vinyl set.BONUS FEATURES EXCLUSIVE TO Blu-rayTM:DELETED SCENESBECOMING N.W.A. – An in-depth look at how the producers and F. Gary Gray tackled the challenging task of casting these larger than life creators of gangster rap.NEVER BEFORE SEEN PERFORMANCEBLU-RAYTM and DVD BONUS FEATURESN.W.A. THE ORIGINS – N.W.A. was a group that changed history. Dr. Dre, Ice Cube, DJ Yella, and many others talk about their start in the 80’s and where it all began.IMPACT – An exploration of the impact N.W.A. and specifically their breakout album that changed everything.DIRECTOR’S JOURNEY – Utilizing a large amount of stand up interviews, we follow F. Gary Gray through the streets of Compton as he brings together the story of the founders of gangsta rap.THE STREETS: FILMING IN COMPTON – Take a look through the lens of Director F. Gary Gray as he perfected the authentic feeling of what it was like to walk the streets of Compton.N.W.A PERFORMS IN DETROIT – We go behind the scenes of what this performance meant to the original members of N.W.A. as they saw their lyrics spark controversy against the corruption of the police in Los Angeles, as well as the thoughts of the actors performing the song on stage for the movie.FEATURE COMMENTARY WITH DIRECTOR/PRODUCER F. GARY GRAY