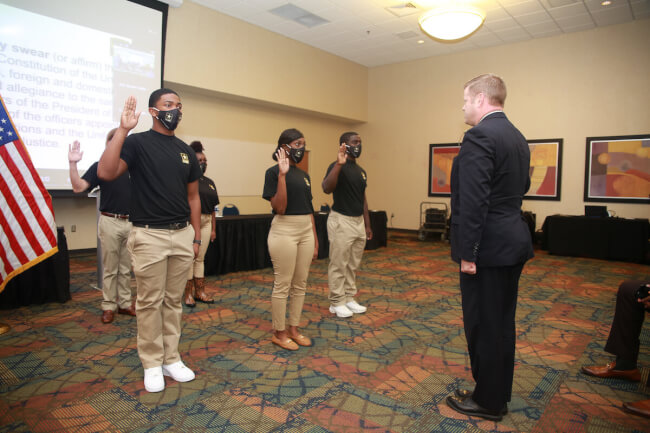 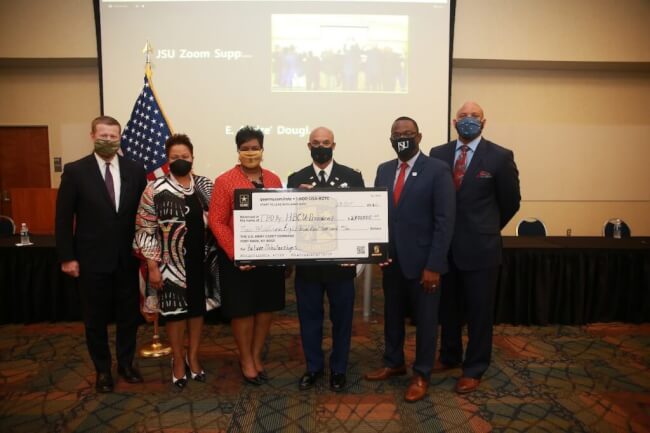 The U.S. Army is providing $2.8 million to be distributed among 26 HBCUs. (Photo by William H. Kelly III/JSU University Communications)

Seeking greater inclusion and diversity in the military, U.S. Army Secretary Ryan McCarthy convened Wednesday at JSU with leaders of Historically Black Colleges and Universities and other influencers during a daylong forum and presented a $2.8 million check to be divided among 26 HBCUs.

In May, the New York Times reported that African Americans are highly visible in the military but invisible at the top – even as 43 percent of the 1.3 million men and women on active duty in the U.S. military are people of color.

McCarthy, acknowledging the disproportionate numbers, said the Army is committed to improving those statistics.

“We start at great universities like here at Jackson State, and we get them into the pipeline,” McCarthy said. He said higher-learning institutions such as HBCUs produce excellent talent in many disciplines, including STEM, that would support the mission of the Army to defend and protect the nation and develop strong leaders. 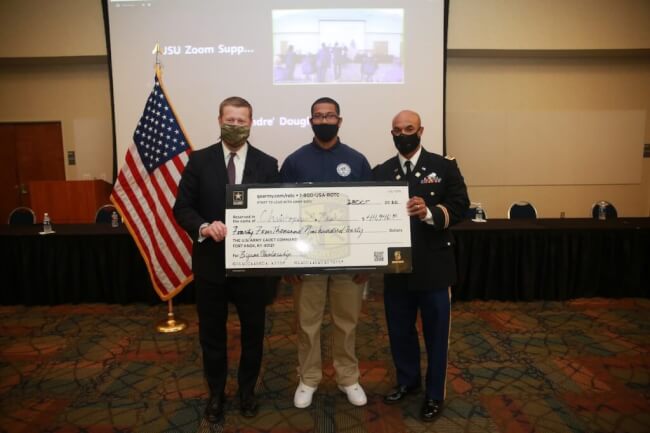 A cadet is awarded more than $44,000 as part of a three-year scholarship. (Photo by William H. Kelly III/JSU University Communications)

He said the Army seeks “young men and women who can meet our standards on the front end, and then we can mentor them along the way.”

Serving as host, Acting JSU President Thomas K. Hudson touted the occasion as a “great opportunity” for the urban institution and its HBCU counterparts. Hudson expressed confidence that the partnership with the Army would contribute to the military’s goals of inclusion and diversity.

“The secretary being here really highlights our great programs that we have at Jackson State University,” said Hudson, also expressing appreciation for JSU serving as the host for the secretary, senior military officers, veterans, cadets, community influencers and organizations such as the local NAACP.

Hudson also acknowledged the important involvement of the National Pan-Hellenic Council (NPHC) that consists of the nine African American Greek organizations that are often identified as the Divine 9.

Hudson added that the partnership supports “our ability to be a really good partner, and it helps the Army reach its goals.” Hudson also pointed to the rich history of JSU, its academic programs, dedicated students and research opportunities through it academic channels as a means of supporting the Army. 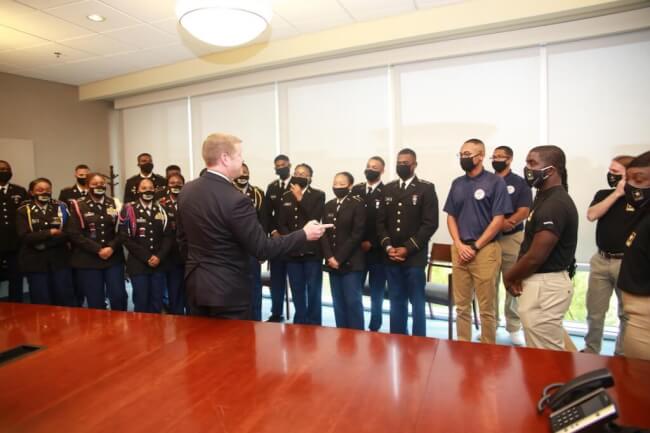 McCarthy greets future leaders who are destined to serve the country. (Photo by Charles A. Smith/JSU University Communications)

He also agreed that the South, in particular, is a great location for the military to recruit service members in the armed forces who can help shape the world.

McCarthy said, “There’s a lot of tough, resilient kids right here in Mississippi. We want to get as many people as we can in our formation.”

Later, McCarthy conducted a swear-in for future soldiers and presented three cadets with nearly $45,000 scholarships each for the next three years.

As mentioned, the NPHC was pivotal in helping to facilitate the secretary’s visit.

Dr. David Marion, chair of the NPHC and the 41st Grand Basileus of the Omega Psi Phi Fraternity, Inc., said his Greek organization works collaboratively with HBCUs. In fact, his organization has an HBCU Initiative Committee that is composed of HBCU presidents or former  presidents who are members of the Omega fraternity and who decide how to dole out scholarship money to predominantly black institutions in support of their endeavors. 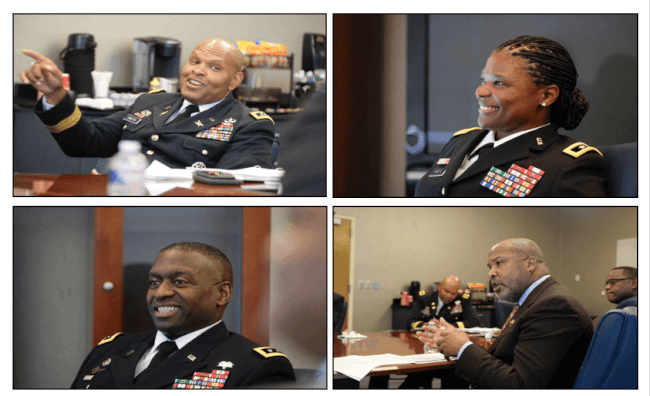 Throughout the day, military and civilian leaders helped bring awareness about the importance of collaboration and greater minority advancement in the U.S. Army. (Photos by Charles A. Smith/JSU University Communications)

Marion said its critically important for the Army to invest in future leadership. As a result, he has dedicated himself to providing assistance and building on the partnership with the Army that would guarantee parity, equality and advancement for service members of color.

McCarthy, meanwhile, said he embraces the efforts of the Omega Psi Phi Fraternity, Inc., along with JSU and other partners.

“That’s critical for us to understand. When we come forward we can show results based on the strength of that institution’s disciplines.” He said there’s a tremendous need for service members with high aptitude which is why the Army is strongly supporting the initiative for diversity and inclusion.

“We invest in everything,” he said. As the Army seeks quality individuals, he said the military always invests in young people who can help develop satellites, tanks, helicopters, etc. In fact, he said, the U.S. Research and Development Command, for example, is central in developing a COVID-19 vaccine. He added that Dr. Anthony Fauci of the National Institute of Allergy and Infectious Diseases, and Dr. Deborah Birx, the White House coronavirus response coordinator, both started their careers in the U.S. Army.

“The more we understand the opportunities that exist the more we’ll also know it presents a chance for young men and women to have a future they might not have had. The Army helped me to get to college. I’m the first person in my family to become an Army officer. I owe a great deal to the institution, so that’s why I try to keep giving back,” McCarthy said. 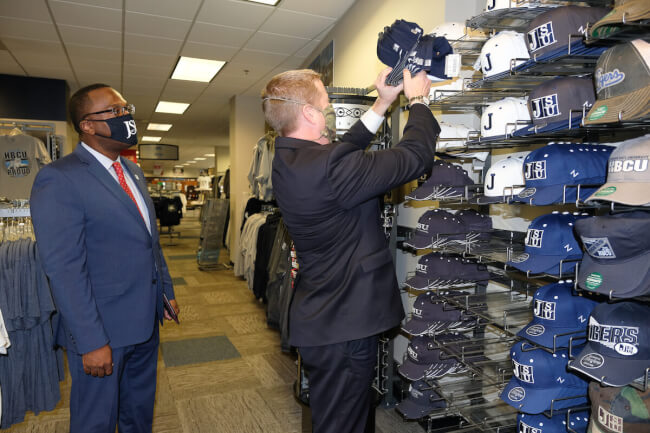