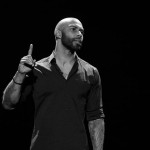 Inspiring original spoken word and music showcase Verses and Flow is set to return for a third season with back-to-back new episodes premiering on Wednesday, September 11, at 9 PM ET and 9:30 PM ET on TV One. Produced by Lexus, the series — once again filmed at the historic Belasco Theater in downtown Los Angeles — returns with emotionally charged poetry and musical performances anchored in contemporary cultural, political and social topics.

“The success of the first two seasons of Verses and Flow places the bar very high for this coming season in September,” said Brian Smith, Lexus Vice President of Marketing. “With our lineup of dynamic performers and the return of our talented host, Omari Hardwick, Season Three will spotlight our brand themes of innovation and individualistic thinking in an entertaining way.”

Said Maureen Guthman, SVP of Program Strategy and Acquisitions for TV One, “Our continued partnership with Lexus allows us to include this exceptional artist platform in our slate of Wednesday night original programming. It’s an honor to provide a third season of truly engrossing performances to our viewers.”

Exclusive series content will be available at www.tvone.tv and at the Lexus site for African American content, Luxury Awaits, www.luxuryawaits.com. Viewers can interact with Verses and Flow via its own website at www.versesandflow.com and its Twitter hashtag #versesandflow.