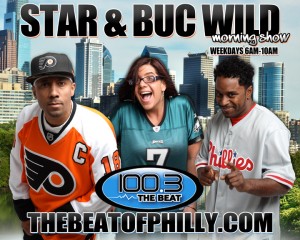 Philadelphia, PA. (June 29, 2011) ““ Troi Torain pka STAR of the Star & Buc Wild Morning show has re-launched his “˜START SNITCHIN’ campaign for the Philadelphia tri-state area. Originated in New York City in 2002, Torain encourages anyone who has information regarding a homicide to contact the local police authorities in hopes to encourage a safer community.Last week, Mayor Michael A. Nutter and Deputy Commissioner Richard J. Ross, Jr. of the Philadelphia Police Department both called into Star’s show to express their praise and applauded Star’s genuine efforts. With support from these public officials, Star’s initiative is underway again in hopes to gain more citizen involvement and address the soaring homicide rate in the City of Brotherly Love.Recent guests on the Star & Buc Wild show supporting this much needed cause include, Tae Zaron-Smith from the “Philadelphia More Beautiful Committee” which promotes youth responsibility, Police Chaplain, Paul “Hurricane” Moore of the 12th district who shared his own movement “Stop the Killing”   and Toshon Jennings of “House of Ladies of Gentlemen” a group that’s committed to education and non-violence.Although the hip-hop culture traditionally preaches against cooperation with authorities, Star feels the needs of the many have reached an all time high and solutions are now in demand. The “Start Snitching” campaign is more than just words being spoken on the microphone says Star; it’s a commitment I’ve taken on personally!Star is available for comments and interviews.https://twitter.com/#!/starandbucwildhttps://thebeatofphilly.com/About: