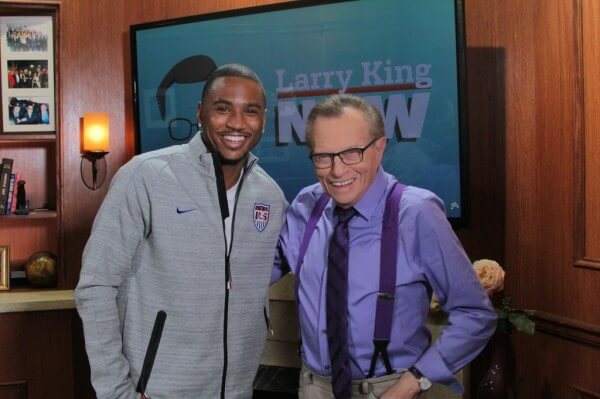 Trey Songz Talks Musical Influences with Larry KingAs he prepares for the release of his sixth album, Trey Songz joins Larry King on “Larry King Now” for an intimate conversation about the man he credits for his music education, what his mom sacrificed for his success, and how he really feels about being a sex symbol.

Larry King asked Trey what it was like collaborating with Justin Bieber and Trey defends Bieber on his use of the N-word – watch the clip here:https://www.ora.tv/larrykingnow/lkn2177songztrey001-0_73o35jmdwyorSONGZ:

We actually happened to be in the same city and I told him to come to the studio and it kinda just happened. It wasn’t planned at all.KING: What did you make of his use of the N-Word? SONGZ: I think we all make mistakes.

Especially as young people. I think if I was found on tape saying some things at 15 I wouldn’t want people to see, you know? And I think the fact that he’s owned up to it and not ran away from it is something that we need to very much encourage, you know because people do make mistakes and people do have blemishes.

But to act like we don’t.KING: So you’re saying to give him some slack? SONGZ: Yeah I’m saying we all make mistakes.KING: Do you use the word? SONGZ: Do I use the N-Word? Yeah from time to time.KING:

But not in a malicious way, right?SONGZ: No. No. Never. You know and it’s coming up you know in urban environments. It’s taught to us. You see older guys are using it and its, the power is taken out of the word because it’s used in endearment, you know?” If you tell a young man of any color, race, or creed that he can do anything, he can now believe it,” Trey said. The most difficult part of being Trey Songz?

The double-edged sword of being a sex symbol. He feels he’s often at the mercy of his fans when it comes to getting involved in a serious relationship – watch the clip here: “You see some relationships work because they’re planned to work, you know?” said Trey. “You see people wait it out until you find this person that’s on that same star-line, and then the fans kinda accept it.”