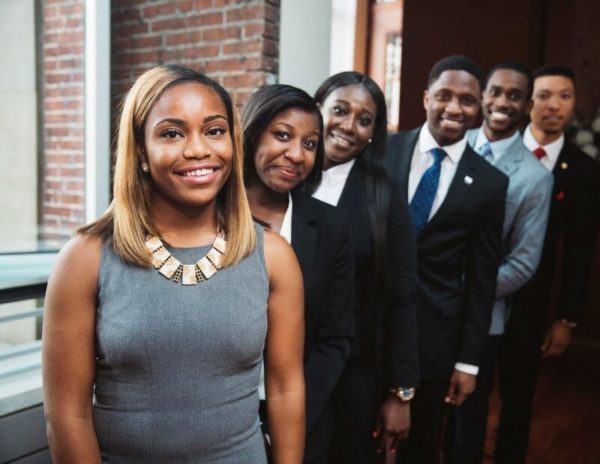 The Apple HBCU Scholars Program is just one element of the $40 million partnership between Apple and Thurgood Marshall College Fund announced earlier this year. (Photo Courtesy of the Thurgood Marshall College Fund) (PRNewsFoto/Thurgood Marshall College Fund)The Thurgood Marshall College Fund launched the application process for the inaugural year of the Apple HBCU Scholars Program, the largest and most comprehensive scholarship effort in HBCU history. Thirty successful undergraduate student recipients will be awarded sizable scholarships and receive year-long mentorships by Apple employees to include a paid internship at Apple headquarters next summer. The scholarship program is open to students in their final year of study from all of the nation’s Historically Black Colleges and Universities (HBCU) and Predominately Black Institutions (PBI).”There are ‘scholarships’ and then there are ‘scholarship programs,'” said TMCF President & CEO Johnny C. Taylor, Jr. “Apple has made an historic investment in a scholarship program that will transform the lives of HBCU star students by not only removing the financial barriers to college attendance, but by providing them additional non-financial program elements like Apple mentors and summer internships. These Apple HBCU Scholars will be the future tech industry leaders.”The Apple HBCU Scholars Program is the first of several programs under the new Apple and TMCF Diversity Initiative. In March, Apple and TMCF announced a partnership to identify, develop and harness talent from the nation’s community of HBCU’s. The over $40 million multi-year commitment from Apple is the largest and most comprehensive corporate investment ever given exclusively for students and faculty of four-year HBCUs. The multi-year commitment includes funding to build a talent database, internships for high achieving students, exposure to Apple’s campus and work environment, and funding of faculty innovation grants focused on developing successful ways to accelerate HBCU students into the tech field. Through TMCF’s entrepreneurial division, select students who have desires to build businesses using technology will have an opportunity to attend Apple’s Worldwide Developer Conference and discover new pathways to successful entrepreneurship through developing new ideas and new apps.”This program is about exposing gifted students from HBCU’s to a career in technology. We’re big believers that innovation will be strongest when talented people from diverse backgrounds are part of the creative process,” said Denise Young Smith, Apple’s Vice President of Worldwide Human Resources. “That’s why we’re so proud to be partnering with TMCF to help us find the next generation of innovators.”The Scholars Program will provide students with a diverse and valuable set of learning and personal growth opportunities that include: a scholarship up to $25,000 for their senior year of studies; a summer internship at Apple headquarters in Cupertino, California; participation in a year-round development program to prepare for post-graduation careers; pairing with an Apple employee mentor during students’ senior year; the opportunity to serve as Ambassadors on their HBCU campuses to build awareness for the Apple and TMCF Diversity Initiative; the opportunity to attend TMCF’s Annual Leadership Institute in Washington, DC in November 2015; and participation in the Apple HBCU Immersion experience in Cupertino, California during the spring of 2016.The application process is open now and will close on September 18, 2015. For more information on the Apple HBCU Scholars Program and eligibility requirements visit https://tm.cf/L1. For information on the TMCF Apple Diversity Initiative, visit tmcf.org and follow @TMCF_HBCU on Twitter.