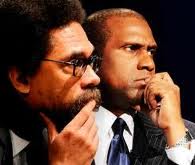 Smiley Radio Properties, Inc. celebrates the second anniversary of its popular radio program, Smiley & West from Public Radio International (PRI), with the addition of two new affiliates in Chicago, IL.The one-hour weekly program, hosted by broadcaster Tavis Smiley and Union Theological Seminary professor Cornel West, will be heard Sundays at 3 p.m. on WCPT – Chicago’s Progressive Talk starting November 4, and Saturdays at 11 a.m. on WVON 1690AM – The Talk of Chicago starting November 10. WCPT will also carry SRP’s other radio program, The Tavis Smiley Show , Sundays at 2 p.m. The two programs can be heard on more than 94 stations nationwide.”We are encouraged to see more stations add The Tavis Smiley Show / Smiley & West to their airwaves, making it available to more listeners nationwide. The conversations that Tavis and Dr. West lead are important to understanding our increasingly diverse communities,” said Alisa Miller, president and CEO of PRI.Smiley Radio Properties (SRP) is also proud to announce new underwriters for the programs. Support from the W.K. Kellogg Foundation, among others, will allow Smiley & West and The Tavis Smiley Show to continue an energetic exchange of news, information, insights, and perspectives throughout 2013.As a thank-you to their loyal Chicago listeners, Smiley and West will co-host a FREE town hall event, open to the public. “Poverty, Power, and the Public Airwaves: Post Election Analysis and Commentary from Tavis Smiley, Cornel West, and Amy Goodman” will convene at 7 p.m. on Thursday, November 8, 2012, at Thorne Auditorium at Northwestern University’s Law School, 375 East Chicago Avenue, Chicago, IL 60611. The town hall event is presented in partnership with Haymarket Books and Democracy Now! Goodman, Smiley, and West will offer observations on the election and share insights on the role the media plays in furthering the erosion of our democracy. How can people organize to ensure that public media outlets like WBEZ are responsible, representative, and responsive? How do we ensure that the public media treats our airwaves as the vital resource that they are? Doors open for “Poverty, Power, and the Public Airwaves” at 6 p.m. and advance registration is required at www.smileyandwest.com.”Now is the time to ask and answer the hard questions on how the public media space can better serve fellow citizens who have traditionally been politically, economically, socially, and culturally disenfranchised,” said Smiley. “We must keep alive the prophetic tradition that defends the dignity of poor and working people, regardless of whatever costs or consequences,” added West.For more information, visit www.smileyandwest.com.