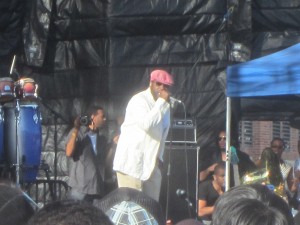 It was days like Sunday, May 27th that made Tony Toni Tone’ sing the classic words, “It Never Rains in Southern California.” Without a cloud in the sky on a nice breezy 80 degree day, the first day of the 2012 UCLA Jazz Reggae Festival  commenced.  Hipsters, hippies, and a multitude of happy people poured onto Intramural Filed on the UCLA campus.Hosted by Jason Bentley and Anthony Valadez of KCRW, everyone in attendance was privy to a lesson in musicianship from the eclectic blend of performers that graced the stage.  As the aroma of deliciously divine delectable dishes  and some of Cali’s finest “anxiety medication” filled the air, people flooded the lawn strategically placing their blankets for the best view of the show’s headliner.  While enjoying fresh lemonade, alkaline water, or some other tropical beverage many in attendance just laid out and enjoyed the sun and musical styles of opening acts, Selah  Sue, Sonny Moon, and Thunder Cat although KCRW DJ’s supplied the soul between the performances.  The laid back groove atmosphere was turned up a notch when Blues guitarist, Gary Clark Jr. took the stage.  His soulfully rocked out Blues had the crowd in a bit of frenzy.  Musical legend, Booker T. Jones then showed why the organ has such a emotional sound as he delivered a lesson in musicianship to those lucky enough to be attendance. 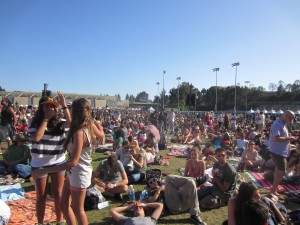 As temperature in the air was starting to cool down, the crowd started to heat up as the anticipation grew for The Roots to hit the stage. Whether they had known about the band since the early 90’s or just found out about them from the Jimmy Fallon show, people were excited to see Black Thought, Quest Love, and the rest of the legendary Roots crew.  Starting off with the show with an amazing Go Go rendition of the classic Beastie Boys record, “Paul Revere,” The Roots paid tribute to Chuck Brown and MCA, whom both just recently passed.  It’s not by accident that this band is successful as they are because you can see the work and love they put into their craft.  They have fun on stage and even the impromptu moments seem to be precise.  Playing some their classic records while blending in elements of jazz, blues, rock, funk, and borrowing from some the legends that paved the way, The Roots did not disappoint.  Whether many of the people knew it or not, they witnessed more than your average hip-hop performance; they just witnessed a classic moment in history.  From James Brown, Frank Sinatra, The Time, BB King, Guns N Roses, and many more,  The Philly crew drew inspiration from the past to bring the crowd an awe-inspiring performance that defined what stage presence should mean to all artists.  In true “Godfather of Soul” fashion, The Roots did encore after encore leaving their fans thoroughly satisfied yet thirsty for more.That aforementioned “thirst” is exactly what the annual UCLA Jazz Reggae Fest has to be a two day event because their is no way you can leave that first day without quenching your desire for more music, food, and california sun.