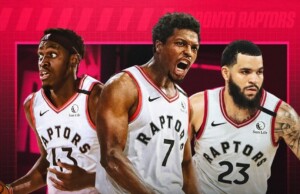 There were two series sweeps this past weekend. The defending champion Toronto Raptors and the Boston Celtics are moving on and will face each other in the next round.The Raptors completed the sweep with a dominant performance, shooting 55.4% from the field and getting 100 points from the bench. The only negative from this game is the ankle injury to Kyle Lowry, which the team hopes is not too serious and will not cause him to miss games. The Brooklyn Nets did an admirable job in the bubble considering most of the players were last minute replacements. They definitely played hard played hard every game, but there are no participation trophies, so they’ll be exiting the bubble.The Boston Celtics defeated their rival the Philadelphia 76ers. Kemba Walker scored 30 points and Jayson Tatum added 28 points and a career high 15 rebounds to lead the way to victory. This is the first time that Walker has advanced in the playoffs and Tatum is a star.As for the 76ers, they kept the game close for three quarters, but after Tobias Harris had to leave the game for a while when he hit his head on the court the Celtics were able to pull away. Harris did return to the game, but it was too late. Joel Embiid led his team with 30 points, but he and his team did not have enough to beat the Celtics. Now that the 76ers season is over the off season of changes will begin. Will the team look the same? Is this the last game coached by Brett Brown?While the Nets and 76ers ponder their futures outside of the bubble, the Raptors and Celtics will prepare to face each other the next round and look to get to the Eastern Conference Finals. Their second-round games begin on August 27th. This will be a good series for NBA fans; with some of the brightest stars in the bubble.