The Graduate School has outperformed its peer institutions in several key areas, including the representation of women receiving Ph.D.s.

WASHINGTON (April 5, 2019) – The Graduate School of Howard University is proud to report the outperformance of its peer institutions in various key areas: the representation of women receiving Ph.D.s; the representation of research doctorates reporting interdisciplinary dissertation research; the starting salaries of STEM doctorates; and the diversity of Ph.D. recipients. 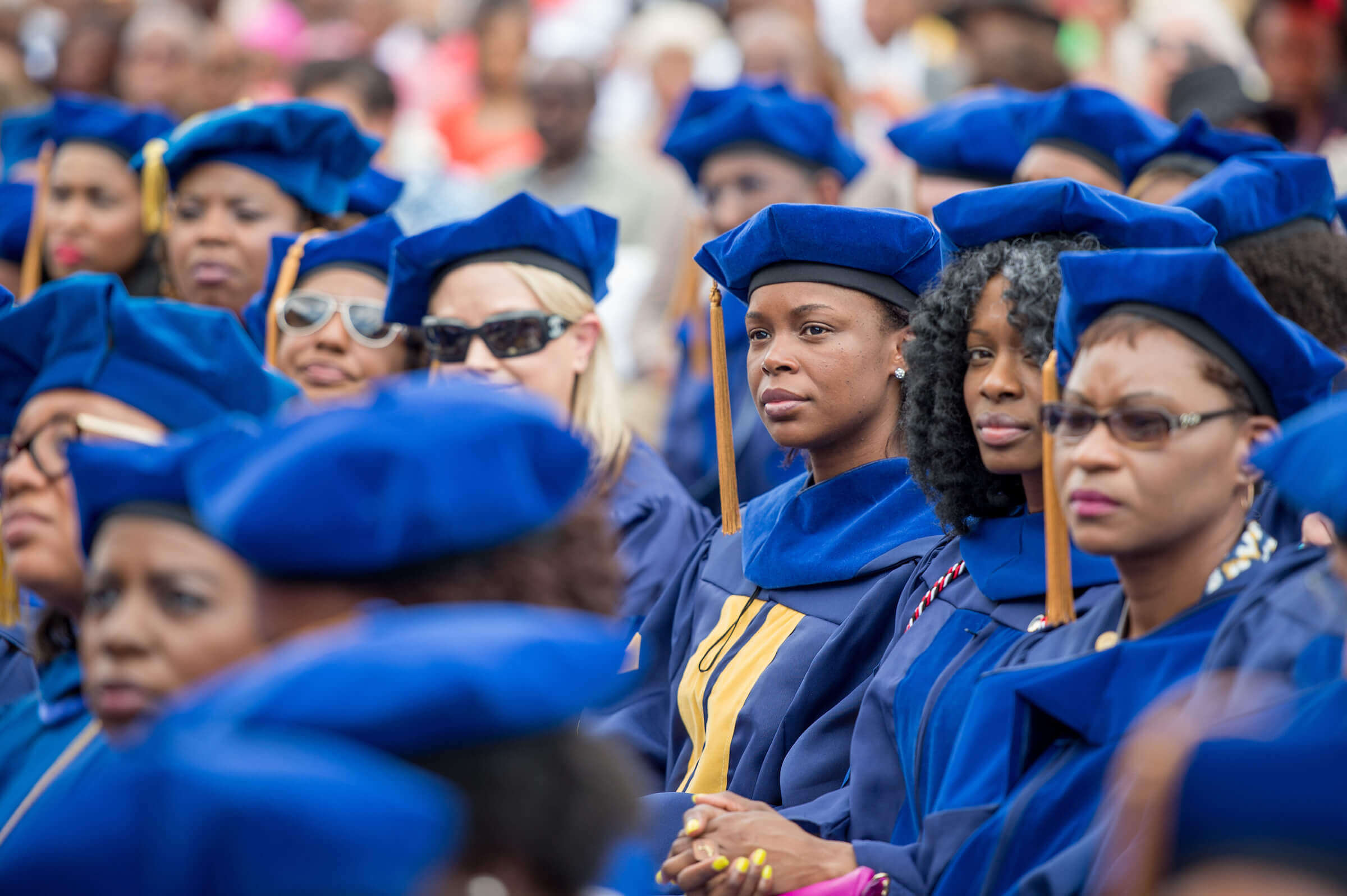 Each year, the Graduate School of Howard University collects data about its Ph.D. graduating cohort through the Survey of Earned Doctorates (SED) developed and sponsored by the National Science Foundation (NSF) and five other federal agencies: National Institutes of Health, Department of Education, National Endowment for the Humanities, Department of Agriculture, and the National Aeronautics and Space Administration. Research doctoral recipients of Howard University’s Graduate School contribute greatly to the university’s efforts to inspire and create new knowledge across disciplines.

“It is so important for us to assess the characteristics of our doctoral population in light of trends in doctoral education. Howard has a long tradition of strong academic programs in Graduate Studies and an equally strong commitment to improving programs continuously to meet the ever-changing needs of our world,” said Interim Dean of the Graduate School Dana A. Williams, Ph.D. “While we know that Howard is exceptional when it comes to thinking about an institution's ‘intangible attributes,’ we also know that we have be more deliberate about gathering and using concrete factors to develop and invest in our doctoral programs.”

The recently issued SED is the latest census of U.S. graduate school profiles and trends in graduate education from data collection in 2017 by 428 institutions, including Howard. The annual profiles include statistics on demographic characteristics, field of study history-trends-pathways, financial support, and postdoctoral plans of Howard’s Ph.D. recipients. These results are compared to national-level data and peer-institution data in the same Carnegie classification.

“In order to receive an accurate glimpse of Howard’s doctoral population, it is important to achieve a high response rate,” noted Graduate Academic Administrator Jahmal McCray, who played a key role as in assisting with the SED data collection. “. In this 2017 profile, of the Graduate School’s 105 Ph.D. recipients, 97.1% participated in the SED. “This surpassed the national response rate of 91.4%,” said McCray.

“The national impact of the Graduate School is visible, immediate and significant,” said Assistant Dean for Graduate Student Affairs and Assessment, Sylvia McDonald-Kaufman. “The Graduate School leads in key metrics when compared to its peer institutions.” She points to notable comparisons that underscore Howard’s leadership in:

Nationally, the 2017 SED brings to light major trends in doctoral education. From 2008 to 2017, the number of research doctorates awarded to Blacks/African Americans increased by 23%. Nationally, Black/African Americans had the highest representation in the field of education, while the Graduate School produced this group’s largest share of doctorates in psychology and social sciences. Science & Engineering doctorates accounted for 76% of all PhDs produced in the Graduate School’s programs in 2017, with women receiving 75% of the degrees. The largest nationwide census growth during the decade was experienced by women doctoral recipients in several subfields, such as materials science and atmospheric sciences, which are doctoral programs housed in the Graduate School.

Howard University offered its first master’s degree in 1867— the same year it was established. In 1934, the Graduate School was formally established and reorganized to its current structure with divisions in the arts and humanities, biological and life sciences, engineering and physical sciences, and social sciences. The school awarded its first doctoral recipient in 1958 in the field of chemistry. Today, the school offers 24 master’s, 31 Ph.D., 7 M.D./Ph.D., and 4 Graduate Certificate Programs. The Graduate School has consistently produced on average more than 100 doctorates per year for the last three years.  For more information, visit www.gs.howard.edu

That Time all Hell Broke Loose at ESSENCE Magazine

6 Great Things about the NEW Music and Radio Industry…