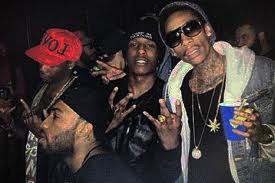 The second annual Under The Influence of Music Tour will hit the road this summer, starring two of the most dynamic and exciting performers in music, Wiz Khalifa and A$AP Rocky. The expanded, 20-city epic hip-hop trek will also feature special guests B.o.B., Trinidad Jame$, Joey Bada$$ & Pro Era and Berner, with performances by Chevy Woods and Smoke DZA.The Live Nation-produced tour is set to begin on July 17 th in the San Francisco Bay Area at the Shoreline Amphitheatre in Mountain View and will culminate on August 11 th at Cincinnati’s Riverbend Music Center.”Last year’s Under the Influence Tour was such a blast, that we decided to double the number of dates and take the tour to even more of our fans across the country,” said tour founder Wiz Khalifa. Last year’s Under the Influence Tour was a major success, making stops at 10 Live Nation amphitheatres around the country and averaging more than 17,000 tickets per show.”I’m looking forward to getting out on the road with Wiz,” said A$AP Rocky. “We’ve talked a lot about doing this and I’m excited that it’s finally come together. This is going to be the biggest party of the summer.”$15 Early Bird tickets will be available from the start of the tour presale through Sunday, April 28 th at 10PM local time, additional fees may apply, quantities limited.Tickets go on sale to the general public beginning on Saturday, April 27 th at www.livenation.com or www.ticketmaster.com. Beginning today, fans can click here or visit https://on.fb.me/XUtLV6 to RSVP for early access to presale tickets available on April 25 th. Citi ® cardmembers will have access to presale tickets beginning Tuesday, April 23 rd at 10AM local time through Citi’s Private Pass ® Program. For complete presale details visit www.citiprivatepass.com. VIP Packages are available at VIPNation.com.Live Nation mobile app users will have access to presale tickets beginning April 26 th. Mobile users can text “LNAPP” or 404040 to download the Live Nation mobile app (available for iOS and Android).Both Wiz Khalifa and A$AP Rocky have massive live followings. Wiz has played more than 400 shows since the beginning of 2010 with major tours including “Deal or No Deal,” “Campus Consciousness,” “Rolling Papers” as well as last summer’s “UTIOM” tour. His latest album, O.N.I.F.C. debuted at Number Two on the charts and the single “Let It Go,” featuring Akon is currently making its way up the charts. Khalifa has released three albums previously including Show and Prove (2006), Deal or No Deal (2009) and Rolling Papers (2011). Khalifa’s megahit single from Rolling Papers, “Black and Yellow,” has sold over 4 Million copies to date.With the announcement of the “Under The Influence Tour,” Wiz Khalifa is proud to announce The Influence Club – The Official Wiz Khalifa Tour Club. The Influence Club will offer you access to ticket presales and VIP packages before the general public and tons of exclusive content from EACH AND EVERY SHOW of Wiz’s upcoming tour! Simply click the ‘Influence Club” link on the wizkhalifa.com home page to get started.A$AP Rocky announced his global arrival in a major way earlier this year when his highly anticipated debut album LONG.LIVE.A$AP entered at the Number One spot on Billboard’s Top 200, Hip-Hop Albums, R&Albums and Digital Albums chart. The album entered the charts Top 10 in 24 countries around the world. Currently a special guest on Rihanna’s “Diamonds World Tour,” Rocky’s take-no-prisoners live set has been galvanizing audiences from coast-to-coast.UNDER THE INFLUENCE OF MUSIC TOURDATECITYVENUEWed, Jul 17*Mountain View, CAShoreline Amphitheatre at Mountain ViewThu, Jul 18Irvine, CAVerizon Wireless AmphitheatreFri, Jul 19Chula Vista, CASleep Train AmphitheatreSun, Jul 21Albuquerque, NMIsleta AmphitheaterTue, Jul 23**Denver, COFiddler’s Green AmphitheatreThu, July 25Austin, TXAustin 360 AmphitheatreFri, July 26Houston, TXCynthia Woods Mitchell PavilionSun, July 28Dallas, TXGexa Energy PavilionTue, July 30Chicago, ILFirst Midwest Bank AmphitheatreWed, July 31Detroit, MIDTE Energy Music TheatreThu, Aug 1Washington, DCJiffy Lube LiveFri, Aug 2Holmdel, NJPNC Bank Arts CenterSat, Aug 3Pittsburgh, PAFirst Niagara PavilionSun, Aug 4Indianapolis, INKlipsch Music CenterTue, Aug 6Wantagh, NYNikon at Jones Beach TheaterWed, Aug 7+Boston, MAComcast CenterThu, Aug 8Hartford, CTComcast TheatreFri, Aug 9MontrealParc Jean DrapeauSat, Aug 10Toronto, ONMolson Canadian AmphitheatreSun, Aug 11Cincinnati, OHRiverbend Music Center*Trinidad James will not be appearing on the Bay Area date.**Tickets for Denver show go on sale on Saturday, May 11th.+Ticket on sale date for Boston, to be determined.