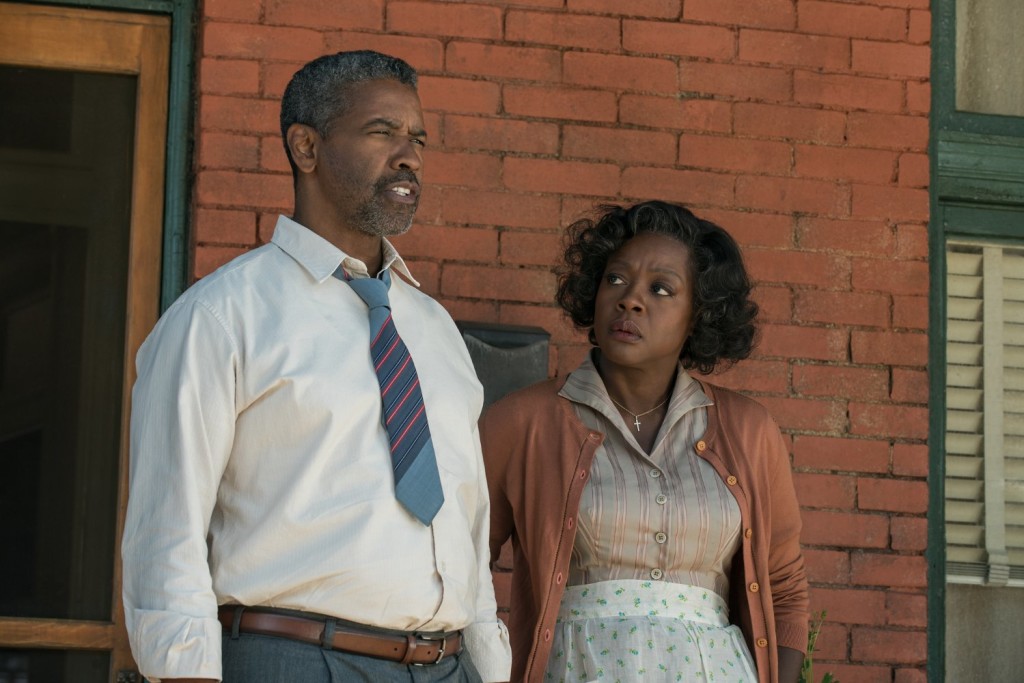 At the close of Denzel Washington’s powerful and brilliant film adaptation of August Wilson’s play Fences, my sister and I sat stunned in our reclining theater seats, letting the weight of it wash over us.

Fences is a masterful piece of theater, a portrait of an African American family in the 1950s, at the center of which is Troy Maxson, a force of nature, a fabulist and charmer as played by actor and director Denzel Washington, whose smooth veneer masks a man struggling with pain, bitterness, limited education, intractable opinions, questionable choices, and fraught relationships with his wife and sons. There is no other word for Denzel’s performance other than … Astounding.

The film finds Troy working the back of a garbage truck and fighting for his right to become the first Negro truck driver in Pittsburgh – a role he ultimately wins despite being unable to read and lacking a driver’s license. Once a star ball player in the Negro Leagues, Troy’s playing days were well before major league baseball was ready to integrate, and Troy now has nothing but contempt for groundbreaker Jackie Robinson or for his teenage son’s opportunity to earn a college scholarship by playing football. He swills gin with his friend Bono and talks shit with the air of an authority, but he must constantly be reminded that times are changing around him.

So often stage plays that reach the big screen are “opened up,” so that the locations and other characters become more fully realized than they were on the page; thus the emphasis and impact of the play can be altered or shifted in ways the playwright didn’t originally envision or intend. Denzel as director is wise enough not to open up the play too much. He gives us a view of a working class black Pittsburgh neighborhood, but keeps true to the play’s key scenes firmly set in the Maxsons’ backyard and kitchen. The smartest move of all is that he lets the camera stay close and still upon its incredibly capable actors, whose performances are sterling. Mykelti Williamson never drifts into excess as Gabriel, the brain damaged WWI veteran and brother of Troy; the actors portraying his sons, particularly Russell Hornsby as Lyons, each have moments that show us the character’s entire lives of struggle and defeat in just a few scenes. But none are more affecting than acting powerhouse Viola Davis as Rose, a loyal wife who is shattered by her husband’s self-serving choices, or by Denzel himself as Troy.

The film is full of wonderfully melodic and metaphoric language and visual symbolism. We have Gabriel and his horn, the Fool who speaks Truth. We have Rose, a symbol of beauty and grace, to whom Grabriel — not Troy — brings a single bloom. There are personal sacrifices and images of crosses. There is the continual building of the titular fence, which Troy successfully erects between himself and others. Troy speaks of wrestling Death in an early scene; in another, he tells a story of being beaten by his father with the reins of a mule. Denzel’s delivery of this monologue is nothing short of miraculous, as he is seen envisioning the moment with a sense of reminiscent humor that we know was entirely absent from the event itself but that allows us to see its horror clearly as though we were there ourselves. Viola Davis’s portrayal of Rose, the woman who seems to be the quiet strength of the film, the eye to Troy’s hurricane, is compelling. In what has to be the climax of Fences, the “I have to tell you something” moment, Viola’s realness will tear at your soul.

I don’t know how to fully express the impact of Fences. By giving actors room to infuse ferocious life into their roles, and creating very simple sets, the import of all that is said and all that is not said falls down on us like a heavy blanket. We feel these people, we know them, we are astounded by them. Our hearts break for them.

It is the best drama I have seen in a long while.